BUSINESS US retail sales plunge 8.7% in March as coronavirus hits

US retail sales plunge 8.7% in March as coronavirus hits

US retail spending took a dive in March as the coronavirus forced businesses to close and shoppers to stay home, falling 8.7 percent from the prior month, the Commerce Department reported Wednesday. 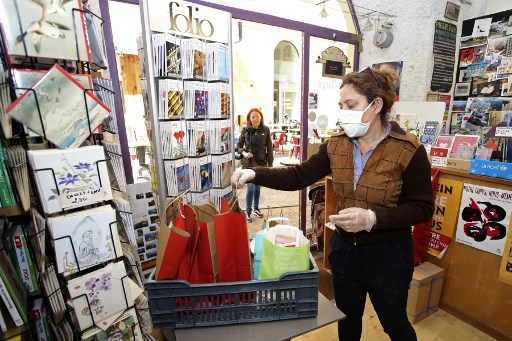 The result was slightly better than expected but shows the rapid deterioration from the 0.4 percent decline in February, with sales plunging in sectors including clothing, furniture and motor vehicles and parts dealers.

The changes reflect the efforts to contain the pandemic, which has forced lockdowns and causing people to avoid shopping malls and restaurants and remain at home.

The most damaging hit was in motor vehicles where sales collapsed by 25.6 percent. Excluding car sales, total retail sales would have declined only 4.5 percent, the report said.

However, food and beverage stores reported sales surged 25.6 percent amid a rush of panic buying as families rushed to stock up, while health and personal care stores also reported growth of 4.3 percent.

Compared to a year ago, total retail sales fell of 6.2 percent.

A separate report from the Federal Reserve Bank of New York showed business activity plummeting by more than ever in the state, which is the site of the worst coronavirus outbreak in the country.

The Empire State Manufacturing Survey fell by 57 points to -78.2, its lowest level ever recorded. The index hit -34.3 during the global financial crisis.

"Severely depressed demand, supply disruptions and extremely high uncertainty will keep manufacturing on an extremely weak trajectory in the near term," Oxford Economics wrote in a note.

While predicting a recovery in New York manufacturing in the third quarter, they warned "the risk of an extended lockdown could make for a very slow and uneven recovery."