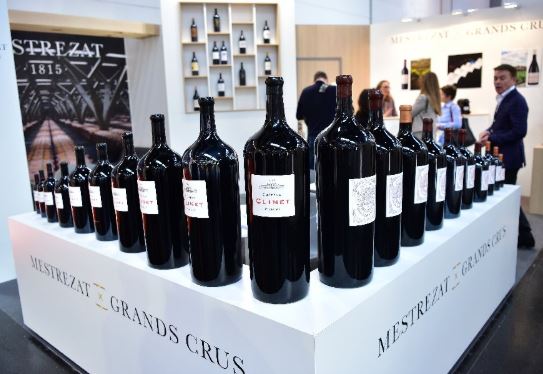 Exhibits of wines brewed by France-based Chateau Clinet are seen at the Prowein in Dusseldorf, Germany, on March 17, 2019. (Photo: Xinhua)

"The proposed US sanctions are simply unacceptable. French taxation on the digital giants aims to restore fiscal justice. It does not only target US companies but also Chinese or European companies," said the French minister in a tweet.

"A digital taxation project at the international level is on the table of the OECD (Organization for Economic Co-operation and Development). France said yes to this project. We are waiting for the American response. If the United States says no, it means that they do not respect the commitment made at the end of August to the G7," he added.

The United States on Monday threatened to impose tariffs of up to 100 percent on $2.4 billion of French goods in retaliation for a digital services tax it says is discriminatory. French wine and cheese are on the list of goods that could be targeted.

France insists that its 3-percent digital tax is necessary to make internet giants pay their fair share of taxes. It targets companies with total annual revenues of at least 750 million euros ($834 million) globally and 25 million euros in France.

The United States initiated its Section 301 investigation into France's planned tax on digital services on July 10, accusing the French government of "unfairly targeting the tax at certain US-based technology companies."