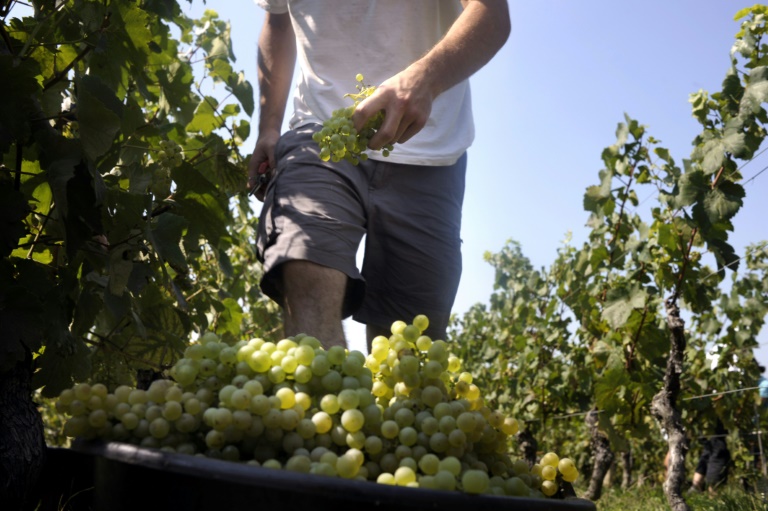 Burgundy winegrowers see themselves as collateral damage in the US trade dispute with the European aviation industry.  (Photo: AFP)

For French winegrowers in the Burgundy region, the new 25-percent US tariffs are leaving a bitter taste on the palate.

But like it or not, they are caught up in a trade war they feel has nothing to do with them.

"This is a thoroughly unfair tax, because it compensates for a dispute relating to the aeronautical, not the wine sector," says winegrower Anne Parent.

She works at Pommard, based in the Cote de Beaune region of Burgundy. A quarter of their turnover is exported to the United States.

The tariffs hitting the wine industry threaten make it part of the collateral damage in President Trump's trade war as Washington targets EU nations behind the Airbus consortium -- notably France -- over aircraft subsidies.

Down in the cellars of the estate, which Parent runs with her sister, a 2019 vintage she judges "absolutely superb" is being put into barrels. In a room upstairs, boxes of Pommard Premier Cru 2017 are being prepared for US export.

Next week, they will ship out "three or four" palettes to the US states of Texas and Wisconsin. "That's how it was planned, (the US tariff announcements) didn't change the schedule," says Parent.

She is hoping the tariffs will be a temporary problem. In the meantime, "it is important to support our clients to show them we are still willing and that this is an important market for us".

Nevertheless, she concedes, "we shall certainly have to make up for a decline in volume and a drop in turnover in the United States," but espies an opportunity "to go and look at other markets or even strengthen our presence in France."

Less than 10 kilometres (6.5 miles) away in the lobby of the Beaune wine merchant Latour, boxes of wine are on the point of being shipped off to New York.

But not all of them.

"This morning we had three containers cancelled," says Louis-Fabrice Latour, chairman of the company, a family business that dates back to the early 18th century. "It's a tough blow,"

Latour, who is also deputy chairman of the Interprofessional Office of Burgundy (BIVB), the voice of the local wine trade, feels

"We are still very surprised, a little taken aback, because it's not really to do with us, it's a conflict that goes a little beyond us and which relates to Boeing and Airbus."

He says his US clients "never really believed" in the sanctions. "So now there's a little bit of panic come aboard."

His firm achieves 20 percent of its sales -- worth 20 million euros ($22 million) -- in the United States and is set to lose "a good third" of a market where Latour has been present "for a century and a half."

If Burgundy is particularly affected by these sanctions, it is because the United States is its prime foreign customer, taking nearly a quarter of its exports.

Latour prefers to rationalise the situation by noting that "it's a 25 percent tax, not a 10 percent one. Everyone can work at 25 percent," he says philosophically.

Thanks to stocks, consumers will only really start feeling the effects in six months, according to Latour --unless an agreement between Europe and the United States emerges by then.

Burgundy has "growth drivers" in other countries, particularly in Asia, which could "offset in part" the volume drop in the US market, says Romain Taupenot, winemaker with Morey Saint-Denis, which exports 80 to 90 percent of its production with US sales accounting for roughly a 20 percent share.

US President Donald Trump "tends to bring out the heavy artillery quickly enough," says Taupenot, though he wants to believes "we're not in a negotiating game."

For Taupenot, "somehow it's a good war on Trump's part -- he's pressing where it hurts."

He believes negotiations could still result in the sanctions being dropped before they are due to come into force on October 18.

One thing is certain. For professional Burgundy winemakers top drawer wines from the region will always find buyers in the United States, even at higher prices.

Things will prove more difficult, however, for mid-range wines at around the $15 pricepoint which pits them notably against competition from Italian producers -- who are not in the sanctions viewfinder.