BUSINESS US service sector contracts for second month in May

US service sector contracts for second month in May 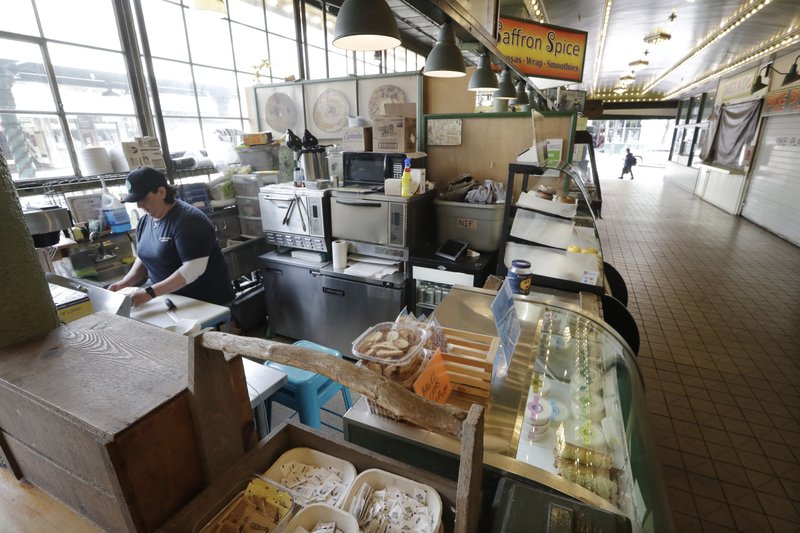 FILE - In this Thursday, April 2, 2020 file photo, bagel shop manager Samantha Maddocks runs then lone shop still open in one walkway in the Pike Place Market in Seattle. Growth in the U.S. service sector slowed in March with a much bigger decline expected in coming months from all the shutdowns and job layoffs that have occurred because of efforts to contain the coronavirus. (Photo: AP)

The U.S. services sector shrank for a second month in May as the coronavirus pandemic triggered shutdowns and layoffs around the country.

Activity did rise from levels last month that had not been seen since the recession.

The Institute for Supply Management said Wednesday that its service sector index stood at 45.4 last month, up slightly from an April reading of 41.8.

Any reading below 50 signals that the service sector, where the majority of Americans work, is in contraction. The April decline broke a string of more than 10 years of expansion in the services sector.

The continued contraction in service industries followed a similar pattern in the industrial sector. The ISM reported earlier this week that manufacturing activity remained in contraction territory in May, with a reading of 43.1, up slightly after registering 41.5 in April.

While manufacturing and service industries improved slightly, economists believe a recovery from the massive shock of the pandemic could be long and painful.

“While some sectors appear to be recovering fairly rapidly as lockdowns have been eased — with mortgage applications surging in recent weeks and early reports suggesting auto sales have bounced back — the ISM non-manufacturing index echoes the message from other survey that it will take longer for the wider economy to recovery,” said Michael Pearce, senior U.S. economist at Capital Economics.

Chris Rupkey, chief financial analyst at MUFG Bank in New York, said that it was concerning that the weakest services survey component was employment, which rose only 1.8 percentage-points to a reading of 31.8 in May.

“We aren’t sure all the old employees are going to find a seat in the new economy,” Rupkey said.

Anthony Nieves, chair of ISM’s non-manufacturing business survey committee, said that social unrest across the country has set back efforts to re-open the economy, with many companies going back into lock-down mode.

“We will have to see how fast the country recovers from the unrest we are seeing now,” he said.

Four non-manufacutring industries reported growth in May, including agriculture, while 14 industries, including mining, arts and entertainment and recreation, were in retreat.