US signs limited deal with Japan on ag, digital trade 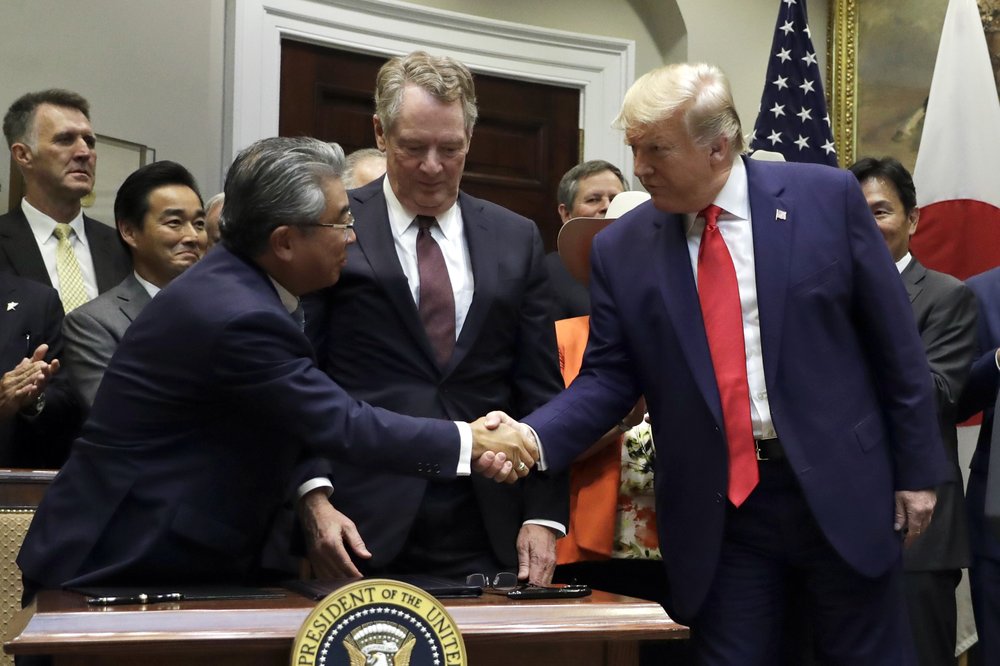 US President Donald Trump shakes hands with Japanese Ambassador to the United States Shinsuke Sugiyama, left, and US Trade Representative Robert Lighthizer after they signed a trade agreement in the Roosevelt Room of the White House, Monday, Oct. 7, 2019, in Washington. (Photo: AP)

The United States and Japan signed a limited trade agreement Monday, a deal that would win back benefits American farmers lost when President Donald Trump pulled out of a broader Asia-Pacific pact his first week in office.

US farmers have been operating at a disadvantage in Japan since Trump withdrew from the Trans-Pacific Partnership agreement, which had been negotiated by the Obama administration. The other 11 Pacific Rim countries, including big farm producers such as New Zealand and Canada, went ahead without the United States and were enjoying preferential treatment in Japan.

“This is a huge victory for America’s farmers, ranchers and growers. And that’s very important to me,” Trump said in a signing ceremony at the White House.

But Tami Overby, senior director on Asia and trade issues at the McLarty Associates consultancy, said America’s competitors in agriculture got a two-year head start and used it to sign multi-year contracts in Japan to sell farm products. “We’re going to have to thrash back and fight for lost market share,” she said.

The deal comes at a time when other parts of the Trump administration’s trade agenda have stalled. The United States has been locked in a costly trade war with China for more than a year — though negotiators are scheduled to resume talks in Washington Thursday. Congress has yet to approve a North American trade deal Trump’s trade team negotiated last year with Canada and Mexico.

While rewarding American farmers, the new US-Japan mini-deal does not resolve differences over trade in autos. Trump has said the two countries continue to work on a more comprehensive agreement.

Trump has threatened to impose import taxes on foreign autos, claiming they pose a threat to U.S. national security. At the UN general assembly, Japanese Prime Minister Shinzo Abe told reporters that Trump had assured him that a previous agreement to spare Japan from new auto tariffs still stood.

But Japanese automakers were disappointed that the United States kept existing auto tariffs at 2.5%.

The limited trade pact also includes market-opening commitments on $40 billion worth of digital trade between the two countries.

Monday’s Japan deal, Overby said, “is important, but it’s still not the whole enchilada.” US business groups are holding out for a broader deal that would give American companies more access to Japan in businesses such as insurance and pharmaceuticals.

Trump has long complained about America’s large trade deficit with Japan, which came to $58 billion last year. Japan is the world’s third-biggest economy behind the United States and China.

News of a US pact with Japan might sound familiar. The deal was first announced at the August Group of 7 summit in Biarritz, France. At the UN gathering last month, the two countries signed an agreement-in-principle.