BUSINESS US steel, aluminum tariffs set to hurt its standing at WTO: experts

US steel, aluminum tariffs set to hurt its standing at WTO: experts

The US could see lasting damage to its economy and its standing at the WTO, as major economies push forward their legal fight against US tariffs on steel and aluminum products at the global trade body, Chinese analysts said on Wednesday. 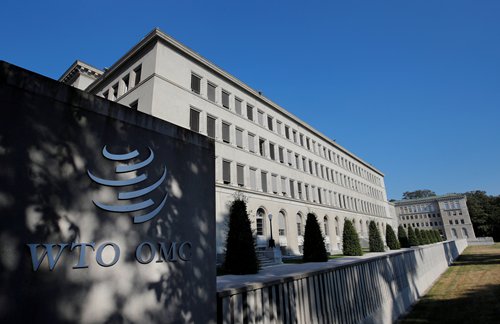 A view of the WTO headquarters in Geneva, Switzerland in July 2018 (Photo: VCG)

Opposition to punitive trade measures launched by US President Donald Trump is picking up pace at the WTO, and analysts said it could end up dealing a major blow to the country that once championed the multilateral trade body.

At a meeting of the WTO's Dispute Settlement Body (DSB) on Monday, seven major economies, including China, the EU, Canada and Mexico, submitted separate requests for the organization to set up a panel to examine whether the US' tariffs of 10 percent on aluminum products and 25 percent on steel goods violate WTO rules.

"While the US claims the measures at issue were taken because of national security reasons, to the complainants it appears that the duties, in their content and substance, were taken as safeguard measures," the DSB said in a document.

He Weiwen, a former Chinese trade official, said the move to request a panel of experts is a "natural" step that is in line with DSB procedures because bilateral consultations between the countries and the US have failed.

"The move itself is very normal. It's just following procedures," He, who is now a senior fellow at the Center for China and Globalization in Beijing, told the Global Times on Wednesday. "But it is significant when seven major economies, including allies, are challenging you at the same time."

At the meeting, the EU said the fact that one country was targeted by seven complaints in one day was "unprecedented" and "a sign of the degree of objection the US actions were eliciting from members," according to the DSB document.

China also said that the "tariffs, taken under the guise of national security, are obviously and egregiously inconsistent" with WTO rules.

The US rejected the requests for setting up a panel and argued that "it is simply not the role of the WTO to review a sovereign nation's judgment of its essential security interests." The US further warned that such a step by the DSB would undermine its legitimacy and "even the viability of the WTO."

But Chinese analysts said that it is the US' reputation and standing at the WTO that is most at risk, not the legitimacy of the WTO.

"No doubt, the US has been one of the most powerful voices, if not the most powerful, in the WTO and it has benefited greatly from its influence… But increasingly, the US is showing a pattern where it does not follow WTO rules when they don't serve its interests," said Bai Ming, deputy director of the Ministry of Commerce's International Market Research Institute.

Bai told the Global Times on Wednesday that although reforms in certain areas are required, the WTO will remain important, despite talk in the US about the diminished role of the multilateral body. He also said it will be hard for the US to maintain its strong voice in a body that it disrespects.

Trade officials from 13 WTO members, including the EU, Australia, Japan and South Korea, convened a meeting last week in Canada to focus on WTO reforms.

In a joint communiqué, the trade officials took apparent aim at the US, saying "we are deeply concerned by recent developments in international trade, particularly the rise in protectionism, which negatively affect the WTO and put the entire multilateral trading system at risk."

"For [the US administration], this might be just about winning short-term gains and winning votes in elections, but the broader implications will last," He said.