BUSINESS US stocks are mostly lower as banks and retailers fall

US stocks are mostly lower as banks and retailers fall 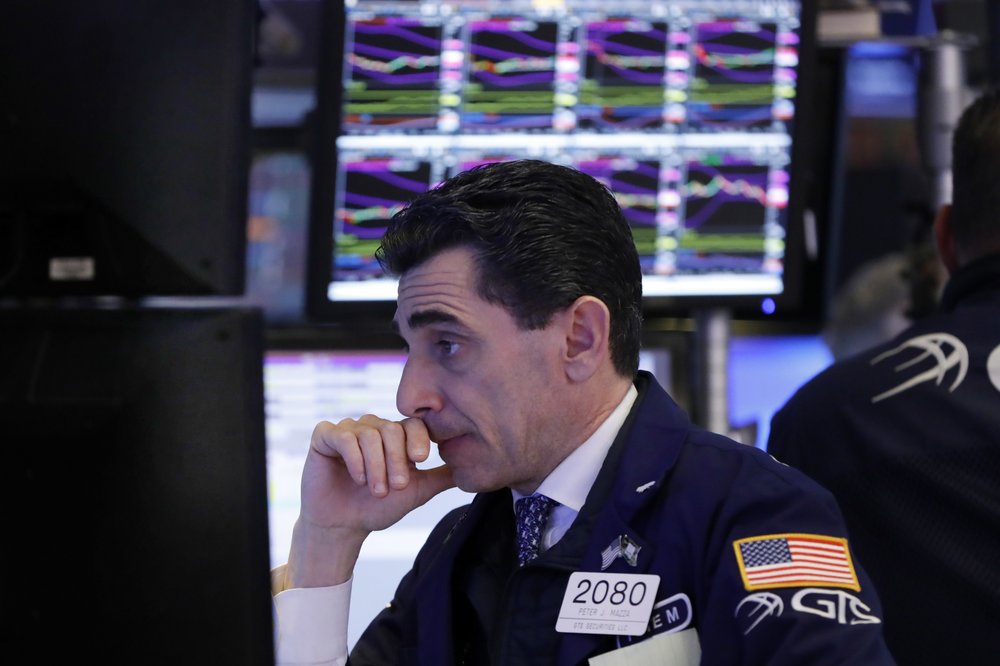 In this December 6, 2018, file photo specialist Peter Mazza works at his post on the floor of the New York Stock Exchange. The US stock market opened at 9:30 am on Thursday, Dececember 13, 2018. (Photo: AP)

US stocks are mostly lower Thursday as banks and retailers fall while safer, high-dividend stocks in real estate and utilities climb. The European Central Bank said it will end its bond-buying economic stimulus program at the end of the year, but trimmed its forecasts for economic growth across Europe. Government bond yields in Europe are falling.

The Russell has fallen 17 percent since setting a record high in late August, and over the last few days it’s traded at its lowest level since September 2017. Among other issues, that reflects investors’ fears about slowing economic growth in the U.S. and rising interest rates. Smaller companies are more vulnerable in times of slower growth, and they tend to carry higher levels of debt than larger companies do. Higher rates make those debts more costly.

ECB ENDS STIMULUS: The European Central Bank said it will halt its bond-buying program, even though the region’s economy is slowing. It has been pumping money into the economy for almost four years and spent about $3 trillion in the process. The bank isn’t ending its stimulus program entirely, as it will continue to invest money from maturing bonds and will take other steps to encourage banks to lend money.

Credit conditions around the world are gradually getting tighter, as the Federal Reserve has been steadily raising interest rates for three years and is letting its balance sheet shrink.

European investors appeared to take the news in stride. Germany’s DAX and the British FTSE 100 were little changed percent while the CAC 40 in France fell 0.3 percent. Bond prices rose and yields fell in Germany, France and other countries, although yields in Britain increased.

RETAIL ROUT: Oxford Industries, the parent of Tommy Bahama and Lilly Pulitzer, and apparel company Tailored Brands both cut their forecasts for the year. Oxford said demand hasn’t been as strong as it expected in recent weeks, and Tailored Brands said transactions at Men’s Wearhouse stores fell in its latest quarter and remained weak in November.

CLEANUP IN AISLE FOUR: CVS Health fell after the New York Post reported that a US District Court judge appears likely to block its purchase of health insurer Aetna at a hearing next week. CVS announced the closing of the $69 billion Aetna deal in late November after the US Department of Justice cleared it. But Judge Richard Leon has reportedly said in hearings that he still has concerns about the antitrust implications of the deal.

BUMPY FLIGHT: Airlines skidded after a disappointing profit forecast from Delta. The Atlanta-based carrier said it expects an adjusted profit of $6 to $7 per share next year. The midpoint of that estimate, $6.50 per share, is lower than Wall Street expects: according to FactSet, analysts expect a profit of $6.70 a share on average.

GE JUICED UP: General Electric climbed 7.3 percent to $7.20 after JPMorgan Chase analyst C. Stephen Tusa upgraded the stock to “Neutral” from “Underweight” saying it believes the risks and rewards to the stock are balanced. GE has lost almost 60 percent of its value this year. The company recently replaced its CEO and slashed its dividend in an attempt to shore up its finances, but analysts are concerned that several of its businesses are years away from being profitable.

BREXIT: British Prime Minister Theresa May won a confidence vote among lawmakers from within her Conservative Party, which means she won’t face another leadership challenge for at least another year. Earlier this week the pound fell to 20-month lows after May pulled a vote on her Brexit divorce deal with the European Union. It’s recovered slightly since then.

QUACKING ABOUT A DEAL: Insurer Aflac rose 6 percent to $45.47 after it confirmed reports that it’s in discussions with Japan Post Holdings about a possible investment. Aflac said the Japanese shipping and financial conglomerate might take a minority stake in the company.