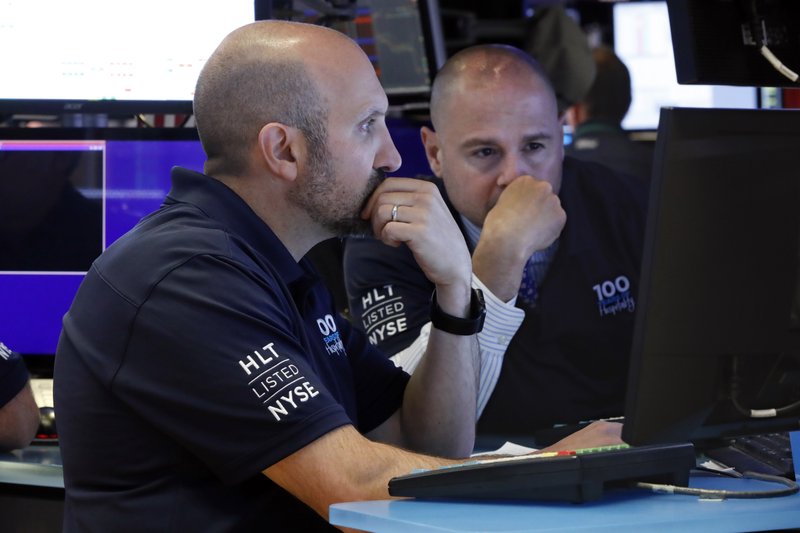 Specialists James Denaro, left, and Mario Picone work on the floor of the New York Stock Exchange May 29, 2019. (Photo: AP)

NEW YORK, June 5 (Xinhua) -- US stocks rallied for the second session on Wednesday as investors grew more confident that the central bank will lower its benchmark interest rates to facilitate economic expansion.

The central bank released its latest beige book on Wednesday, saying the US economy expanded at a "modest pace" overall from April to mid-May.

The beige book is a periodic economic snapshot that contains economic reports from 12 Federal Reserve districts. The newly released one was based on anecdotal information collected through May 24.

Nearly all districts reported some growth, but there were indications of uncertainties, with some regions citing slowdown in manufacturing, higher input costs led by tariff increases, and struggles in agriculture.

The markets have been broadly expecting the central bank to cut its benchmark rate twice before the end of the year in response to current conditions.

Bank of America Merrill Lynch said in one of its latest global research reports that the bank now expects the Fed to cut interest rates by 25 basis points in September, another 25-basis-point cut in December and a final one in early 2020.

On the economic front, US private sector employment increased by 27,000 jobs from April to May, the payroll processor Automatic Data Processing (ADP) said Wednesday.

It missed the forecast of 175,000 jobs from economists surveyed by Econoday.

The Institute for Supply Management(ISM)'s non-manufacturing index rose to 56.9 percent in May from 55.5 percent in April.

The non-manufacturing sector continues to experience a slight uptick in business activity, but it is still leveling off overall, according to ISM's report released on Wednesday.

"Respondents are mostly optimistic about overall business conditions, but concerns remain about tariffs and employment resources," the report said.