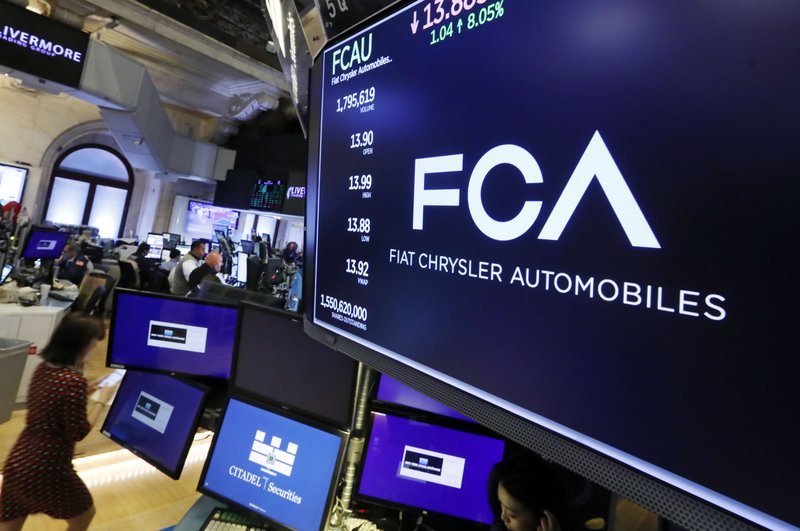 The Fiat Chrysler Automobiles logo appears above a post on the floor of the New York Stock Exchange, Tuesday, May 28, 2019. (Photo: AP)

NEW YORK, May 28 (Xinhua) -- US stocks ended lower on Tuesday, closing the first day of the holiday-shortened week negatively, as investors' deepening worries over US-China trade frictions weighed on the market.

US companies viewed as trade bellwether suffered marked losses on Tuesday amid dampened investor sentiment. Among the worst performers, shares of Micron Technology plunged over 3.1 percent.

Shares of Beyond Meat rose nearly 8 percent, after the US producer of plant-based meat substitutes announced a deal to start making its products at its first production plant in Europe next year.

"The consumer response in Europe has been very positive, and we look forward to being able to better serve those customers with locally produced products," Seth Goldman, executive chairman of Beyond Meat, said in a statement.

Shares of Southwest Airlines lost nearly 2.2 percent, after US independent investment bank Evercore downgraded the company's stocks to "in-line" from "outperform," saying it was undermined by the grounding of Boeing's 737 MAX jet.

Ten of the 11 primary S&P 500 sectors traded lower around the closing bell, with consumer staples sector down around 1.8 percent, leading the losers.

On the economic front, US consumer confidence index went up sharply to 134.1 in May from 129.2 in April, primarily driven by employment gains, the Conference Board said Tuesday.

"Consumer Confidence posted another gain in May and is now back to levels seen last Fall when the Index was hovering near 18-year highs," said Lynn Franco, senior director of Economic Indicators at the New York-based business research group.

"Consumers expect the economy to continue growing at a solid pace in the short term, and despite weak retail sales in April, these high levels of confidence suggest no significant pullback in consumer spending in the months ahead," Franco said in a statement.