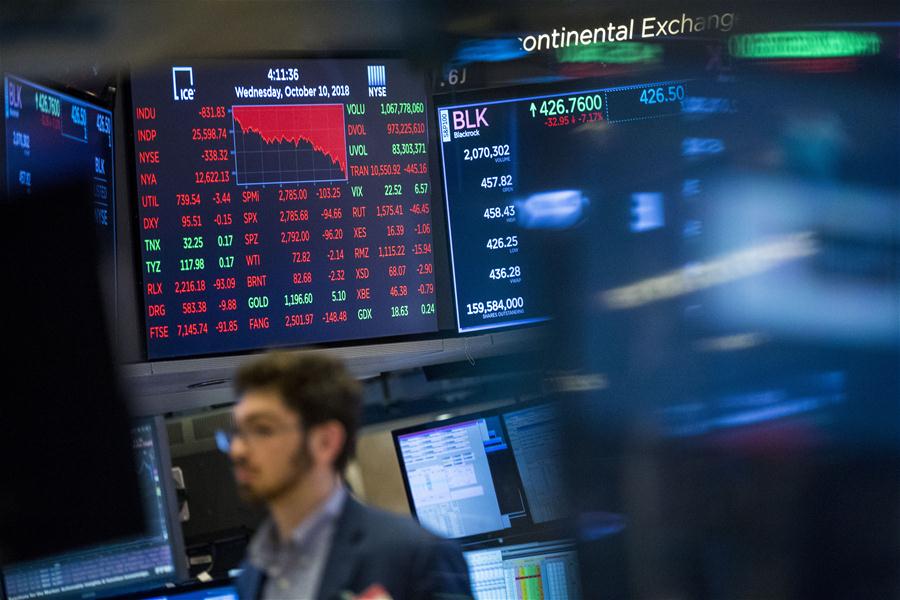 The trading information is seen on the electronic screen at the New York Stock Exchange in New York, the United States, Oct. 10, 2018. (Photo: Xinhua/Wang Ying)

The tech sector includes the largest companies by market cap in the United States and those that have been the biggest contributors to the extended bull market.

Investors have been grappling with higher interest rates following a batch of key economic data and recent comments from top central bank officials.

The unemployment rate declined to 3.7 percent in September, and total nonfarm payroll employment increased by 134,000, according to the US labor department.

Fed Chair Jerome Powell last week said that the US central bank had a long way to go before interest rates hit neutral, indicating that more hikes could be on the horizon.

US producer prices increased 0.2 percent in September, reversing an unexpected decline in August and in line with expectations.

Final demand prices declined 0.1 percent in August and were unchanged in July. On an unadjusted basis, the final demand index advanced 2.6 percent for the 12 months ended in September, said the Labor Department on Wednesday.

Strong data and commentary from Fed officials can be bullish for equities, but that comes with the side effect of having concerns on more inflation and interest-rate increases, which in turn is a negative for equities, experts noted.

Third quarter earnings are expected to increase 21.5 percent from the same period last year. Excluding the energy sector, the earnings growth estimate declines to 18.5 percent, according to Thomson Reuters.