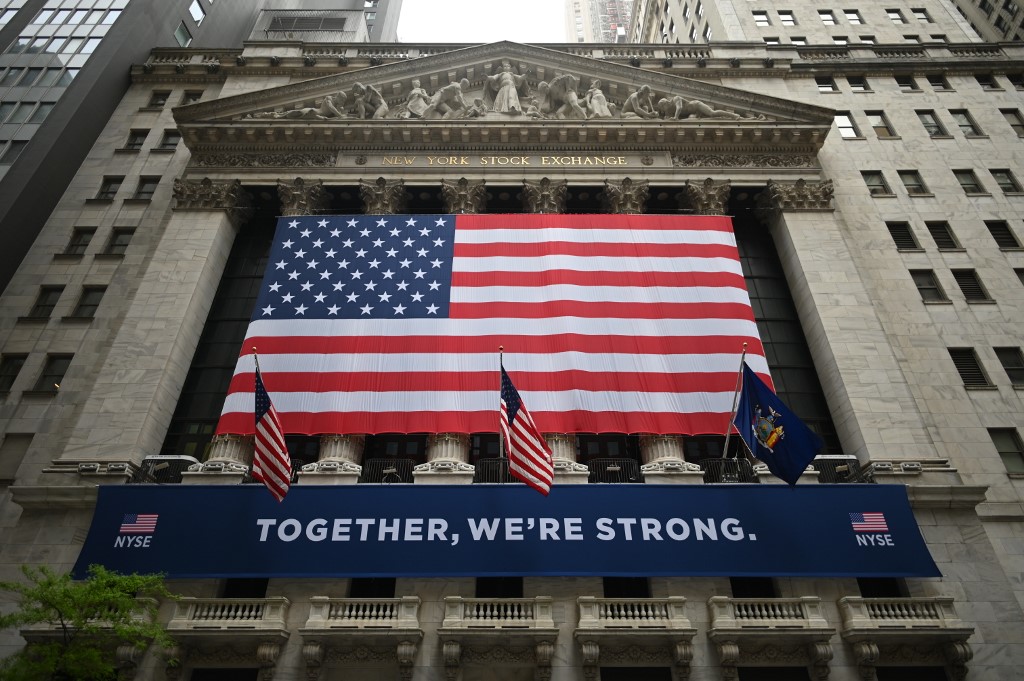 The New York Stock Exchange (NYSE) is pictures on May 26, 2020 at Wall Street in New York City. (Photo by AFP)

Wall Street stocks mostly fell and the dollar pulled back Wednesday after the Federal Reserve signaled it expects to keep interest rates low in light of the shaky economic outlook.

The Fed confirmed it will keep the benchmark interest rate at zero until the recovery from coronavirus shutdowns is underway, while projecting the US economy would contract by 6.5 percent this year and unemployment would fall to 9.3 percent from its current 13.3 percent.

"The ongoing public health crisis will weigh heavily on economic activity, employment and inflation in the near term, and poses considerable risk to the economic outlook over the medium term," the central bank said in a statement after a two-day meeting.

Most Fed policymakers expect the key rate to stay the same through 2022 at least, according to the central bank's forecast.

Both the Dow and S&P 500 finished lower following a volatile session that punished banks, energy companies and other sectors, while the Nasdaq surged to its third straight record, ending above 10,000 for the first time.

Fed Chair Jerome Powell said Friday's Labor Department data showing an unexpected drop in unemployment was a "welcome surprise," but cautioned that "it's a long road" back after more than 20 million workers were displaced by coronavirus shutdowns.

"He's very cognizant of the fact that the recovery might not unfold as quickly as the stock market seems to think it will," O'Hare said.

The Fed's pledge of low interest rates for years to come "added octane to the dollar's downturn," said Joe Manimbo, senior market analyst at Western Union Business Solutions, adding that "the path of least resistance appears lower for the greenback."

Earlier, the OECD warned that the world economy would shrink by at least six percent this year, with an unprecedented loss of income and "extraordinary uncertainty" caused by measures to contain the deadly coronavirus outbreak.

In the case of a second wave of COVID-19 later in the year, economic output could shrink by as much as 7.6 percent, according to the OECD, which added that the recovery will be "slow and uncertain".

With unemployment high, private debt levels in some countries are "uncomfortably high," said the report, "and business failure and bankruptcy risks loom large."