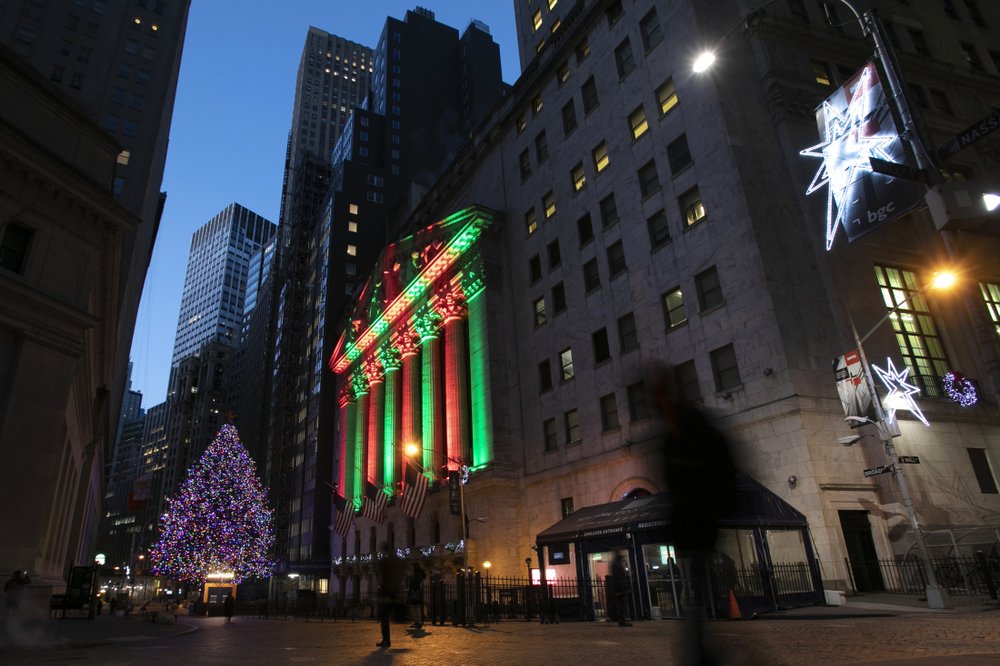 The New York Stock Exchange (NYSE) is bathed in holiday light, in New York City as stocks are slightly lower Thursday morning, December 20, 2018, a day after another big plunge rocked markets around the world. (Photo: AP)

Stock prices are falling further on Wall Street Thursday, a day after another big plunge rocked markets around the world.

The benchmark S&P 500 index has slumped more than 6 percent in the last six days and is now 15 percent below the peak it reached in late September. After steady gains through the spring and summer, stocks have slumped in the fall as investors worry that global economic growth is cooling off and that the U.S. could slip into a recession in the next few years. Oil prices fell sharply again.

Investors are responding to a weakening outlook for the U.S. economy by selling stocks and buying ultra-safe US government bonds. The bond-buying has the effect of sending long-term bond yields lower, which reduces interest rates on mortgages and other kinds of long-term loans. That’s generally good for the economy.

At the same time, the reduced bond yields can send a negative signal on the economy. The bond market has correctly predicted several previous U.S. recessions by buying long-term bonds and sending yields down.

Smaller company stocks have been crushed during the recent market slump because slower growth in the U.S. will have an outsize effect on their profits. Relative to their size, they also tend to carry more debt than larger companies, which could be a problem in a slower economy with higher interest rates.

The Russell 2000 is down almost 24 percent from the peak it reached in late August and it’s down 12 percent for the year to date, twice the loss of the S&P 500 index, which tracks large companies.

On Wednesday, stocks gave up an early gain and ended up with big losses after the Federal Reserve raised interest rates for the fourth time this year and signaled it was likely to continue raising rates next year, although at a slower rate than it previously forecast.

Questions about future interest rate moves are adding to the confusion for investors. Speaking at a news conference late Wednesday, Federal Reserve Chairman Jerome Powell acknowledged that the Fed’s decisions are getting trickier because they need to be based on the most up-to-date figures on jobs, inflation, and economic growth. In the last three years the Fed has been able to tell investors weeks in advance that it was almost certain to increase rates.

Oil prices continued to retreat. They’ve dropped about 40 percent since early October as the slowing global economy and rising production have knocked prices down.

Bond prices were mixed. The yield on the two-year Treasury note rose to 2.67 percent from 2.65 percent, while the yield on the 10-year note stayed at 2.77 percent.

The gap between those two yields has been shrinking this year. When the 10-year yield falls below the two-year yield, investors call it an “inverted yield curve.” That is often interpreted as a sign a recession is coming, although it’s not a perfect signal, and when recessions do follow inversions in the yield curve, it can take a year or more.

Health care and household goods companies were taking some of the largest losses after weak results from companies including Walgreens and Conagra. Both of those companies reported disappointing sales, and Conagra sank 11.6 percent to $25.73 while Walgreens Boots Alliance lost 4.2 percent to $70.24