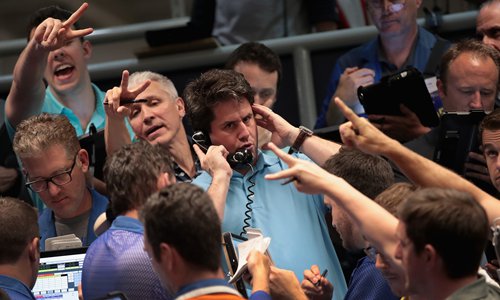 China's financial markets continue to be shaken as US tariffs on Chinese goods may soon take effect, but experts say such shocks are temporary as financial markets will correct themselves, and China should shift its focus to the domestic market.

On Tuesday, the yuan's central parity rate against the US dollar weakened by 287 basis points to 6.518, the fifth consecutive drop and the lowest level since January 10, 2018.

Chinese mainland stock markets also showed no signs of rebounding after weeks of declines. The Shanghai Composite Index shed 0.52 percent to 2,844.51 points on Tuesday, but the Shenzhen Component Index inched up 0.16 percent to close at 9,339.37 points.

The two bourses have been bearish in recent weeks, with the Shanghai bourse dropping from a high of 3,168.96 points on May 23 and the Shenzhen market from 10,631.12 points on the same day.

Zhou Yu, director of the Shanghai Academy of Social Sciences' Research Center of International Finance, said that the yuan has recently been saddled with increasing downward pressure.

"The escalating trade war between the US and China is one major reason, as the market expects a big drop in China's trade balance," Zhou told the Global Times on Tuesday.

US President Donald Trump in mid-June announced a plan to impose a 25 percent tariff on Chinese goods worth $50 billion. The duties will be collected starting July 6.

"The Chinese government is allowing the yuan to depreciate based on market forces, as this would help offset the negative impact of US tariffs," Zhou said.

Cong Yi, an economics professor at the Tianjin University of Finance and Economics, noted that the yuan's depreciation is a natural response to the US dollar's interest rate increase cycle as well as the forthcoming trade barriers.

"Depreciation is not totally bad for the domestic economy, but it could slow down the yuan's international use and lead to possible capital outflow," Cong told the Global Times on Tuesday.

"The rising risks of pledged shares in recent months have added to investor jitters," Cong said.

In June, about 10 listed companies announced that their shareholders' pledged shares hit the liquidation bottom line, according to a Shanghai Securities News report on June 15.

Zhou said that in the short term, a weaker yuan would drive the stock markets down, but not necessarily so in the long run.

However, Zhou said that the shock from the trade war will gradually subside.

"The markets have been overreacting," he said, adding that Chinese companies will also raise their prices to deal with the tariffs, but US companies will find it difficult to seek alternative markets as huge as China's.

Zhou also said investors will gradually get used to the trade situation.

"Or, if things go worse, the government can also intervene to prop up the markets," he said.

"Based on economic indicators, China's economic momentum and fundamentals remain strong," he said.

And Cong said that it's more important to reinvigorate the real economy than to worry about external factors.

"China needs to strengthen its reforms to meet the domestic demand in some fields instead of relying on external markets," he said.

"China should also remain focused on deepening its reform strategy, and a rising real economy can insulate us from any external forces," Cong noted.

The government announced on Sunday a cut in the reserve requirement ratio to the markets, but Cong stressed the government should also see to it the money won't flow to the real estate or virtual reality sectors, but must support the real economy of the country.

Top image: Traders make offers in the S&P options pit at the Cboe Global Markets exchange (previously referred to as CBOE Holdings) on Monday in Chicago, Illinois. The stock markets plummeted Tuesday amid fears of an escalating trade war with China, with the tech-heavy NASDAQ leading the way followed by the S&P and the Dow Industrial Average. (Photo: AFP)