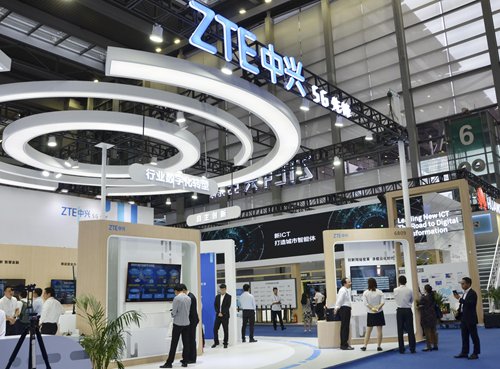 ZTE's booth at the China Hi-Tech Fair, which was held in Shenzhen, South China's Guangdong Province on November 18 (Photo: VCG)

The US is considering further tightening of its controls on exports by emerging technology sectors such as artificial intelligence (AI) and robots, but Chinese industry representatives said that such restrictions would hurt US industries more and could spur a greater technology push in China.

The US commerce department may expand the scope of export controls to emerging technologies including AI and quantum computing, which are seen as essential to the national security of the US, according to official US site federalregister.gov. Public comments on the proposed new rules are being sought until December 19.

Although the administration of President Donald Trump has not yet come up with a final decision on the new restrictions, shares of US tech stocks continued to plunge following the news.

Major US chipmaker Nvidia saw its shares fall by 4.4 percent in early trading on Tuesday, following a 12 percent drop on Monday. Shares in chipmaker Qualcomm fell by 0.36 percent, following a drop of  nearly 2 percent the day before.

The US has been keeping a close eye on China's technology development as China has been quickly catching up with the US in some areas.

Experts believe China has pulled ahead of the US in AI development, even though the Trump administration prioritized AI funding in the government budget, according to a statement released in May.

The US also considers Made in China 2025 - a plan to upgrade China's manufacturing sector - a competitive threat to US industries.

"There's no need to overact to the new restrictions and no need to be pessimistic as the impact will be limited," Wei Shaojun, director of the Institute of Microelectronics at Tsinghua University, told the Global Times on Tuesday.

In the AI sector, at least, there is not a huge gap between China and the US, and the two sides can benefit from cooperation with each other, he noted. "In fact, restrictions on China are restrictions on the US itself," he said.

As China is the largest buyer of US semiconductors, US companies will bear heavy losses if the Trump administration increases the restrictions on technology exports, Wei added.

Semiconductors and electronic components were among the top five US product categories exported to China in 2017, with a total value of $6.89 billion, according to a report published by the Federation of American Scientists in July.

The US government has been acting against the will of Silicon Valley, as tech companies mostly want global cooperation to boost their growth, Liu Kun, an industry representative, told the Global Times.

"It's not the first time that the US has tightened tech exports to China. Past experiences showed that the US' controls did not hinder China's technology development," he said.

Lately, China's top leaders have been calling for breakthroughs in innovation and advanced technologies, as well as for enhanced fundamental research.

In addition, government officials and industry representatives have learned from the recent ZTE crisis - when the Trump administration temporarily barred US companies from supplying components to the Chinese tech giant. ZTE was facing chaos, as it relies heavily on US-made components.

This made it clear how important domestically developed technologies are, industry representatives said, and it provides further motivation for the country to achieve its objective of becoming self-sufficient in technology.

China is now taking the lead in some sectors such as AI and quantum computing, reflecting its continuous efforts to pursue greater self-reliance, Wang Xiaoliang, head of the semiconductor division at the Chinese Institute of Electronics, told the Global Times.

"As the US closes its door, China will remain open and seek more cooperation with other countries and regions such as the EU and Russia," he said.