BUSINESS US threatens to delist Chinese companies ahead of trade talks

US threatens to delist Chinese companies ahead of trade talks 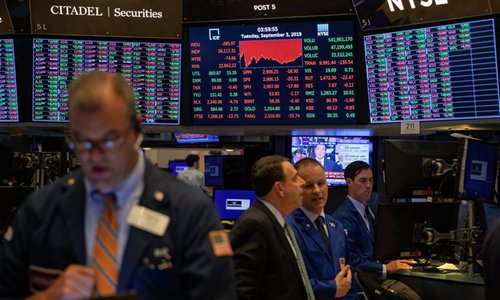 Traders work at the New York Stock Exchange in New York, the US. (Photo: Xinhua)

The US government is ramping up efforts to apply more pressure on China, with the latest moves reportedly including considering delisting Chinese companies from US stock exchanges, limiting US investment in China and launching new investigations into China's tech companies, which experts said are part of US tricks to seek favorable terms in the upcoming trade talks.

Such measures were rolled out as China and the US are preparing to resume trade talks in October to settle trade frictions that have rattled the two countries for more than a year. They also came as China has sent out friendly signals, such as encouraging domestic companies to purchase US soybeans and pork.

"In the past rounds of trade talks, the US used similar measures to pressure China. The US wants to increase its bargaining chips before the new round of trade talks, while at the same time taking measures to counterbalance China," Yang Zirong, an associate research fellow at the Chinese Academy of Social Sciences told the Global Times, calling such actions "US hegemony."

Bloomberg reported on Friday that the US government is considering delisting Chinese companies from US stock exchanges. If implemented, this would affect dozens of US-listed Chinese companies, including the likes of Alibaba and Baidu.

The Nasdaq Composite Index slipped by 1.13 percent to 7,939.63 points on Friday. Share prices of Alibaba and Baidu slumped by 5.15 percent and 3.67 percent, respectively.

In response to the reports, Nasdaq said they provide "non-discriminatory and fair access" to eligible companies, CNBC reported.

The idea of the US government to delist Chinese companies from US stock markets is "extremely ridiculous" and "technically not feasible," Yin Jianfeng, a researcher at the Chinese Academy of Social Sciences, told the Global Times.

"If Chinese companies are forced to delist from US stock markets, what will happen to US investors of those companies? Their interests will be harmed as well," Yin said.

"Also, one important reason for the US' status as the global financial center is that it can attract overseas companies to get listed on it equity markets. If Chinese companies are forced to delist, it means that the US is giving up its position as a financial center, and Chinese capital would no longer flow to the US," Yin noted.

Yang Delong, the chief economist at Shenzhen-based First Seafront Fund Management Co, said that forcing Chinese companies to delist from US stock markets is neither in line with market principles nor in the interests of US stock exchanges.

"This will hurt the reputation of US stock exchanges and cause their revenues to slump," he said.
Among the US-listed Chinese companies, including Ctrip and Baidu, from which the Global Times sought comments, none replied as of press time.

US government officials are also examining how the US could put limits on the Chinese companies included in stock indexes managed by US firms, Bloomberg said.

Several leading global stock index companies, including US-based ones like MSCI and S&P, have taken steps to include A shares in some of their indexes.

"Overseas investors' emphasis on A shares is the result of the rising Chinese economy and financial competence. US obstruction would add to the uncertainties in China's stock markets in the short run," Yang Zirong said.

Apart from financial sanctions, the US government is also taking measures to crack down on China's high-tech sector.

The US International Trade Commission launched two investigations into certain semiconductor devices and related products by several Chinese tech companies like TCL, Hisense and the Shenzhen-based OnePlus, according to a statement published by the Trade Remedy and Investigation Bureau under China's Ministry of Commerce on Friday.

Neither TCL nor Hisense commented when contacted by the Global Times.

Yang suggested that faced with such sanctions, Chinese companies should focus on domestic development and maintain opening-up.

"The US might take impose more financial sanctions against on Chinese industries, companies and individuals in the future. To face avoid such sanctions, Chinese companies can avoid potential losses by seekingseek IPOs in domestic or European capital markets," Yang suggested.