BUSINESS US to withdraw from tomato trade deal with Mexico

US to withdraw from tomato trade deal with Mexico

WASHINGTON, Feb. 7 (Xinhua) - The United States will withdraw from a 2013 agreement with Mexico on tomato trade, the US Department of Commerce said Thursday, citing complaints from farmers that Mexican tomato imports have eroded the interest of US domestic producers. 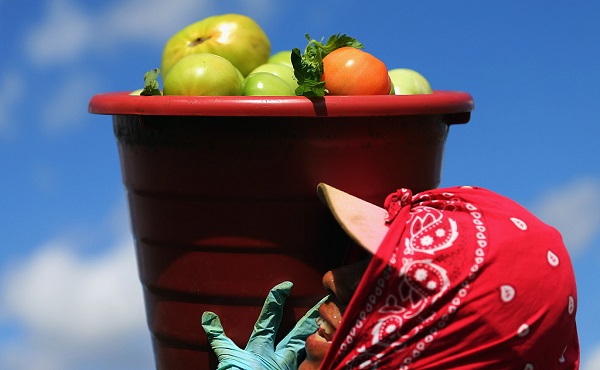 A worker carries a bucket of tomatoes as she harvests them in the fields of DiMare Farms on February 6, 2013 in Florida City, Florida. (File Photo: VCG)

"On February 6, 2019, the Department of Commerce notified the Mexican signatories to the 2013 Suspension Agreement on Fresh Tomatoes from Mexico that the Department intends to withdraw from the Agreement," the department said in a statement.

"With the written notification, Commerce intends to withdraw from the Agreement on May 7, 2019," it added.

According to the statement, the United States began negotiating revisions to the six-year-old trade pact with Mexico in January 2018, but "significant outstanding issues remained" with regard to finding mutually acceptable compromises.

The agreement suspended an anti-dumping investigation into Mexican tomato imports in exchange for the Mexican side agreeing to certain restrictions.

The department said that in November 2018, the Florida Tomato Exchange, a private company based in Maitland, Florida, requested that the Commerce Department "end the deal and resume the anti-dumping investigation of fresh tomatoes from Mexico."

"We have heard the concerns of the American tomato producing industry and are taking action today to ensure they are protected from unfair trading practices," the statement read, citing remarks of US Secretary of Commerce Wilbur Ross.

"Commerce finds at this stage that it is appropriate to notify the Mexican signatories of our intent to withdraw, terminate the Agreement, and resume the investigation," the statement said.

Politico reported Thursday that 46 US Senators and House Representatives wrote to Ross last week, urging him to take action. They complained that Mexico's share of the US tomato market has risen from 32 to 54 percent since 1996, when an earlier tomato trade agreement went into force.

The report said by addressing the lawmakers' concerns, the Commerce Department aims to rally Congressional support for the US-Mexico-Canada Agreement, a replacement for the 1994 NAFTA deal that Mexico and Canada signed with the United States on Nov. 30, 2018 under pressure from the Trump administration.

The new trade deal needs to be approved by the three nations' legislative bodies before taking effect.

However, some producer groups from California -- which accounts for over 95 percent of processed tomato the country produces -- and other US western states warned that if the United States resumes anti-dumping investigations into Mexican crops, Mexico may retaliate with similar moves targeting US agricultural products such as apple, according to a report by CNBC.