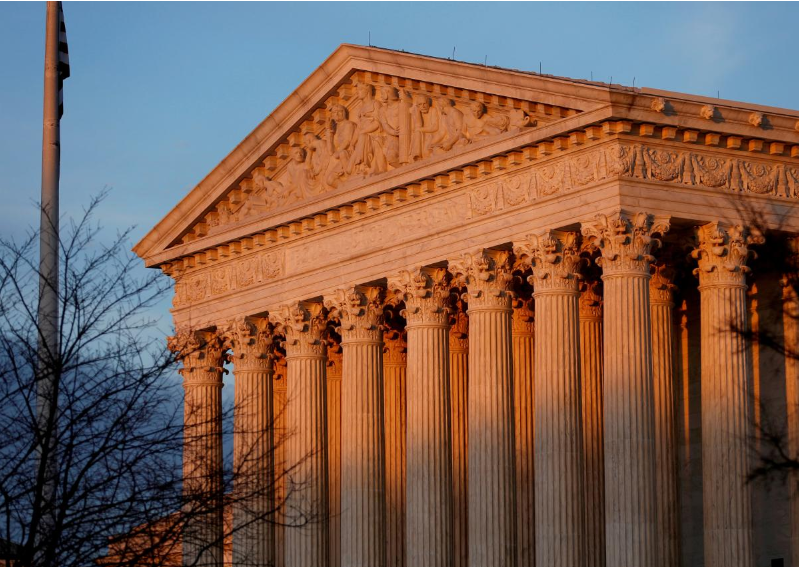 Light from the setting sun shines on the Supreme Court in Washington, DC, US, January 20, 2018(Photo: Reuters)

The US Supreme Court delivered a blow to the rights of workers on Monday by allowing companies to require them to sign away their ability to bring class-action claims against management, agreements already in place for about 25 million employees.

The justices, in a 5-4 ruling with the court’s conservatives in the majority, endorsed the legality of the growing practice by companies to compel workers to sign arbitration agreements waiving their right to bring class-action claims on various disputes, primarily over wages and hours.

The ruling could apply more broadly to discrimination claims but the court did not explicitly address that issue.

Growing numbers of employers have demanded that their workers sign waivers, guarding against the rising number of class-action claims brought by workers on wage issues. Class-action litigation can result in large damages awards by juries and is harder for businesses to fight than cases brought by individual plaintiffs.

The ruling is the latest in a series of pro-business decisions issued by the conservative-majority Supreme Court in recent years that have curbed class-action claims of various types and endorsed the practice of arbitration to resolve contractual disputes. Companies have said that arbitration is quicker and cheaper than litigation in court.

Justice Neil Gorsuch, Trump’s appointee to the court, wrote the ruling and was joined by the four other conservative justices. Gorsuch wrote that federal arbitration law does not conflict with the National Labor Relations Act, which outlines the right of workers to act collectively.

“The policy may be debatable but the law is clear: Congress has instructed that arbitration agreements like those before us must be enforced as written,” Gorsuch wrote.

Workers have fought back against the waivers, arguing that the cost of pursuing their cases individually in arbitration is prohibitively expensive.

‘TAKE IT OR LEAVE IT’

“The court today holds enforceable these arm-twisted, take-it-or-leave-it contracts — including the provisions requiring employees to litigate wages and hours claims only one-by-one. Federal labor law does not countenance such isolation of employees,” Ginsburg said in a statement she read in court.

Ginsburg said she does not believe the ruling would apply to claims alleging discrimination on the basis of race, gender, religion or national origin that are covered by Title VII of the landmark federal Civil Rights Act.

Civil rights advocates are not so sure.

“Today’s decision will make it easier for employers to escape liability for widespread discrimination and harassment. No American should be forced to sign away their right to invoke the meaningful protections afforded by our nation’s critical civil rights laws,” said Kristen Clarke, president of the Lawyers’ Committee for Civil Rights Under Law.

The ruling came in the biggest business case of the court’s current term, which began in October runs through the end of June.

“When it comes to grievances regarding wages and hours, we believe individual arbitration agreements strike that reasonable balance and are pleased with the court’s decision in support of this,” Epic CEO Judy Faulkner said in a statement.

“It is essential to both our democracy and a fair economy that workers have the right to engage in collective action,” McNicholas added.

The NLRB argued that the waivers violate federal labor law and let companies evade their responsibilities under workplace statutes. The NLRB in 2012 said for the first time that such waivers were invalid. At the time it had a Democratic majority.

About one in four private-sector non-union employees have signed arbitration agreements that include class-action waivers, according to the Economic Policy Institute.

One US law firm, Ogletree Deakins, seized on the ruling by launching a new service that it said would help employers create arbitration agreements containing class-action waivers for employees in less than five minutes.