US toys may face 'price shocks' 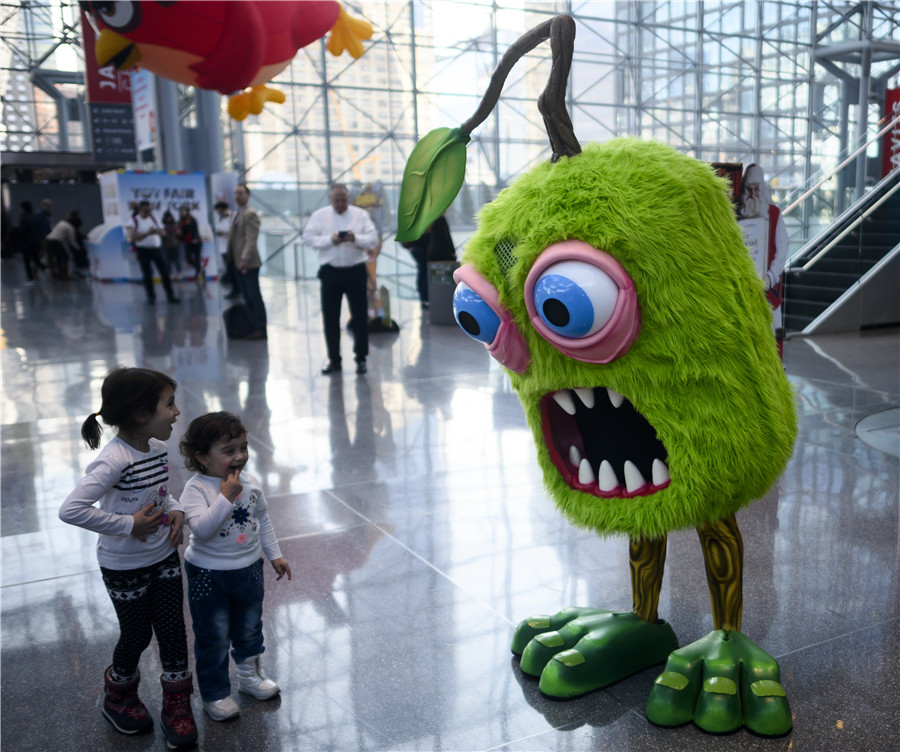 Two children interact with a giant doll during the annual New York Toy Fair over the weekend in New York, the United States. (Photo: Agencies)

For Jason Cheung, who owns a 40-year-old family business that makes educational toys, it is difficult to imagine moving production out of China, where his company has manufactured its products since the firm's founding.

"Although the price of manufacturing in China has risen in the past four decades, China is now able to produce the quality that we need and still at a lot more reasonable price versus Vietnam and many other countries," said Cheung, president of the California-based Popular Playthings.

"The US toy industry has built up a relationship with Chinese manufacturing over decades, and that is not a relationship that is likely to change anytime soon," said Rebecca Mond, vice-president of federal government affairs at The Toy Association.

On average, 3 billion toys of great variety are sold annually in the United States, according to Mond. The manufacturing base needs to be able to keep up with the market's changing trends and interests, and diverse needs, making China the best choice for the industry, she added.

"The infrastructure is there, and the capacity is there," Mond noted.

"If we could make them (toys) in the US, we would," said Mark Pasin, the director of international sales at Learning Resources and Educational Insights Inc. "But it (producing toys in China) is the best value and quality we can find - that's why people go to China."

"Up to this point, we haven't been hit too hard by the tariffs, but we do have concerns," he said, referring to the import tariffs the US government put on Chinese goods.

Learning Resources and Educational Insights produces educational toys for children of all ages.

"China has very good factories for toys," Pasin said. "They handle the printing, making the product. It's really difficult to make this in the US like the way we do in China."

The tariffs imposed by the US on $250 billion of Chinese imports have affected multiple raw materials used in toys manufacturing. The finished products, while not currently on any of the existing tariff lists, could be hit if a trade agreement is not reached by March.

The imposition of new tariffs was put on hold by the meeting between President Xi Jinping and US President Donald Trump on Dec 1.

"Since then, we have been very actively advocating against the tariffs," Mond said.

"Right now, finished products aren't affected yet. However, when it gets to that stage, the finished products will be affected across the board - not only toys but for everyone else," said Cheung. "At that stage, our costs will go up due to the tariffs, so we might have to pass some of that on to our customers, because we can't absorb them all. But overall, we would expect a drop in sales."

"US consumers and US businesses are paying this tariff - it's not China," Mond said.

Ninety-five percent of the US toy industry, which supports more than 700,000 jobs in the US, is made up of small businesses, and the industry is uniquely dependent on China, making tariffs especially impactful, she noted.

China is also a rising market for the US toy companies, Mond added.

"The US market (is) highly competitive. It's pretty saturated at this point, and there's a lot of opportunities for US companies to sell in China," she said.

According to the Guangdong Toy Association, the year-on-year growth rate of exports declined sharply from 36 percent in February to 1.6 percent in September last year.