BUSINESS US trade deficit expands in June amid growing tensions

US trade deficit expands in June amid growing tensions

Washington. The US trade deficit swelled in June by the largest amount in 19 months, reversing much of May's trade-war driven export bonanza, even as brinkmanship between Beijing and Washington worsened, reported AFP. 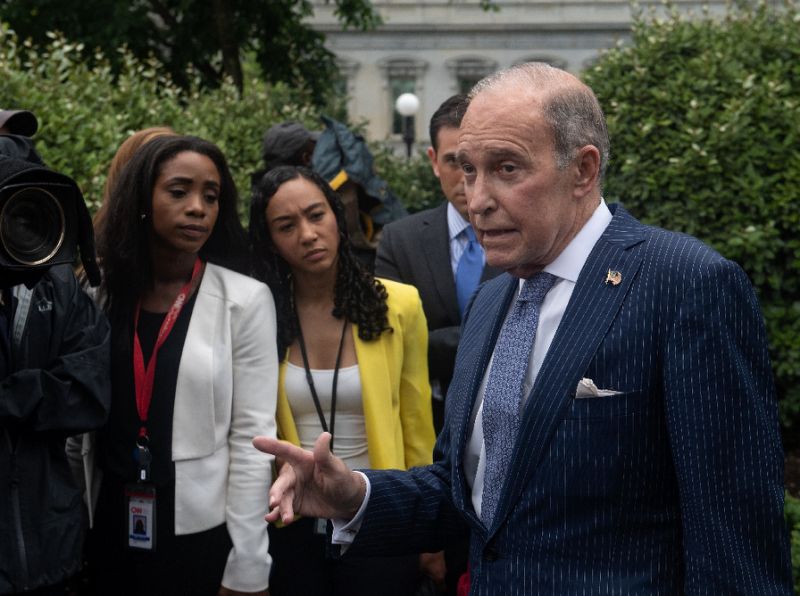 White House economic aide Larry Kudlow, pictured July 2018, warns not to "underestimate" Trump on trade, but a dip in auto exports and rising oil prices has increased the gap between US imports and exports, causing the US trade deficit to swell (Photo: AFP)

A dip in auto exports and rising oil prices in June drove the increase in the gap between US imports and exports, the Commerce Department reported Friday.

And bilateral US deficits widened with China, the European Union, Canada and Mexico, all trading partners that have retaliated against President Donald Trump's multi-front global trade war.

Shortly before the numbers were released, Beijing warned it was ready to impose new tariffs on $60 billion in American products, responding to Trump's plans to jack up the punitive duties on the next $200 billion in Chinese goods to be targeted.

The US trade deficit rose 7.3 percent or $3.2 billion in June to $46.3 billion, overshooting analyst expectations in the largest jump since November 2016, according to the Commerce Department.

The result could weigh on revised calculations of second quarter growth in the United States, which Trump hailed as a key achievement last week after it was reported as the strongest GDP increase in nearly four years.

In May, a rush by Chinese importers to beat Beijing's looming counter-tariffs led to a surge in US exports of crude oil and soybeans, temporarily driving down the deficit and boosting GDP growth in the April-June period.

While soybean exports continued to rise in June, US shipments of automobiles, aircraft and pharmaceuticals fell.

Ian Shepherdson of Pantheon Macroeconomics warned that "a big decline is coming" in the third quarter, which should boost the trade gap by about $3 billion a month.

Exports and the strong dollar

"Exports will rise over the quarter, but strong domestic demand growth will lift imports more rapidly," he said in a client note.

Trump has said trade wars are "easy to win" and made the soaring US-China goods deficit -- which rose to $32.5 billion last month -- a principal issue in his nationalist economic agenda.

But industry and allies in his Republican Party have expressed fear the dispute could spiral out of control.

Average prices for imported oil hit the highest level since December 2014 at $73.60 a barrel -- bringing the value of oil imports for the month to $19.6 billion, also the highest in three and a half years.

Rising oil prices also boosted the value of American crude exports, which were the highest on record at $20.4 billion.

Oxford Economics said the escalating trade battle between Washington and Beijing made the future even more difficult to predict.

"Our modeling indicates a trade war with China would have clear, negative implications for the US economy," the forecasting firm said in a research note.

Concluding a two-day visit to Washington on Friday, Jesus Seade, a trade negotiator for Mexican President-elect Andres Manuel Lopez Obrador, said signaled there was a chance to resolve talks to update the North American Free Trade Agreement this month.

"It is feasible that is feasible" to finalize the negotiations in August, he told reporters, but cautioned that there were "complicated things" left to resolve.

Mexica officials will return to Washington next week to continue the discussions.

Wall Street had a good day despite the disappointing trade numbers and concerns about the confrontation with China, which came along with a robust but weaker-than-expected monthly jobs report.