BUSINESS US trade deficit falls 8.2 pct to $43.1 billion in November 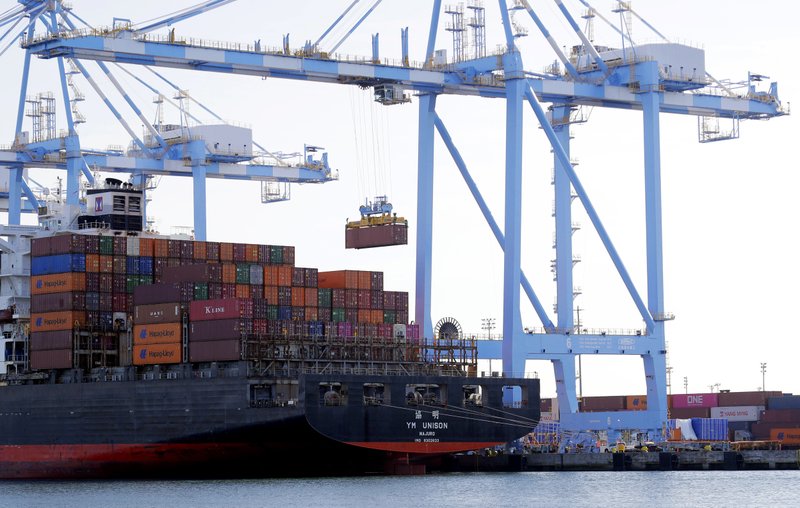 In this Nov. 4, 2019, photo cargo cranes are used to take containers off of a Yang Ming Marine Transport Corporation boat at the Port of Tacoma in Wash. (Filep hoto: AP)

The US trade deficit fell in November to the lowest level in more than three years as US exports rose while imports declined, putting the country on track to see the first annual decline in the trade deficit in six years.

The Commerce Department said Tuesday that the gap between what America sells and what it buys abroad narrowed by 8.2% in November to $43.1 billion, the smallest deficit since October 2016.

That would mark the first year-to-year improvement since the deficit narrowed in 2013.

Economists said the third monthly decline in the trade deficit should give a boost to overall growth as measured by the gross domestic product in the fourth quarter.

Andrew Hunter, senior US economist at Capital Economics, said he believed GDP growth would come in around 2% in the October-December period with the trade improvement providing much of that strength.

But he cautioned that the improvement was built on a number of special factors that will not be repeated such as the end of the strike at General Motors which boosted auto exports. Still, he said with global manufacturing starting to improve, the worst of the trade slump may be over.

“The stabilization in global manufacturing activity and the trade truce with China suggest that the drag on the US economy from weak growth overseas has now run its course,” Hunter said.

Trade flows between the world’s two biggest economies have been disrupted this year by the tit-for-tat trade war as both nations have imposed tariffs on the other nation’s products.

Trump withdrew a new round of tariffs covering popular consumer items such as cellphones that had been scheduled to go into effect in December after progress was made in reaching a so-called phase one trade agreement. That deal is scheduled to be signed on Jan. 15 in Washington, but business executives are braced for more trade turbulence if the phase two talks covering more contentious US demands do not go well.

While Trump sees the US trade deficit as a sign of economic weakness that can be overcome with tougher trade deals, mainstream economists said the deficit reflects an economic reality that doesn’t yield much to changes in government policy: Americans consume more than they produce, and imports fill the gap.

Imports and exports of petroleum both fell in November but imports declined by a larger amount, pushing up the size of the US surplus in petroleum to $832 million, the third straight month the country has run a petroleum surplus and the largest amount on record going back to 1978.

In November, the United States ran a $63.9 billion deficit in the trade of goods such as autos, food, and appliances. But it ran a $20.8 billion surplus in services, including education and banking.