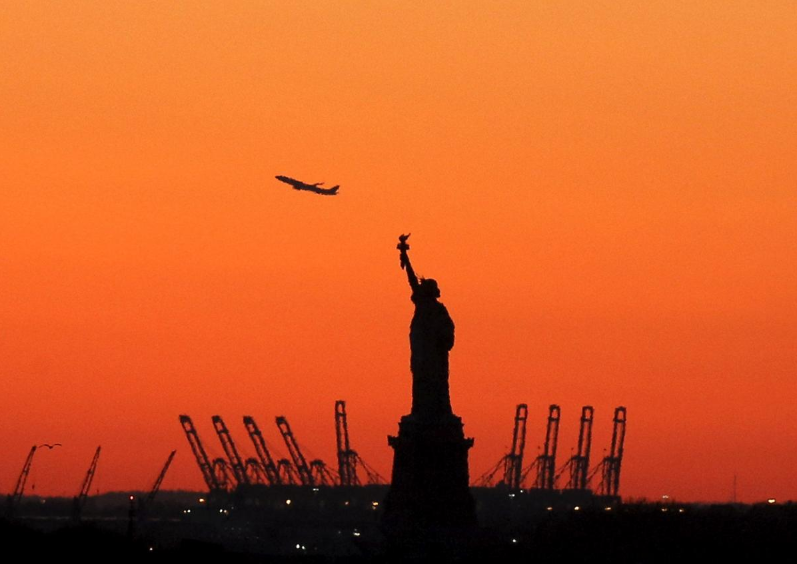 A plane is seen during take off in New Jersey behind the Statue of Liberty in New York's Harbor as seen from the Brooklyn borough of New York February 20, 2016. (Photo: Reuters)

The US trade deficit narrowed sharply in March as exports increased to a record high amid a surge in deliveries of commercial aircraft and soybeans, bolstering the economy’s outlook heading into the second quarter.

While other data on Thursday showed a modest increase in new applications for jobless benefits last week, the number of Americans receiving unemployment aid fell to its lowest level since 1973, pointing to tightening labor market conditions.

Wage growth is also rising, with hourly compensation accelerating in the first quarter. Strengthening wage growth should put upward pressure on inflation and keep the Federal Reserve on a gradual path of monetary policy tightening.

The US central bank on Wednesday left interest rates unchanged and said it expected annual inflation to run close to the Fed’s 2 percent target over the medium term.

“The good news is that we are exporting more, but with the labor markets incredibly tight, labor costs are accelerating as well,” said Joel Naroff, chief economist at Naroff Economic Advisors in Holland, Pennsylvania. “The rise in labor costs will undoubtedly factor into policymakers’ thinking when they meet again in June.”

The Commerce Department said the trade deficit tumbled 15.2 percent to a six-month low of $49.0 billion in March. The trade gap widened to $57.7 billion in February, which was the highest level since October 2008.

March’s decline ended six straight monthly increases in the trade deficit. The politically sensitive goods trade gap with China dropped 11.6 percent to $25.9 billion, which will probably do little to ease tensions between the United States and China.

US President Donald Trump has threatened tariffs on up to $150 billion worth of Chinese goods to punish Beijing over its joint-venture requirements and other policies Washington says force American companies to surrender their intellectual property to state-backed Chinese competitors.

China, which denies it coerces such technology transfers, has threatened retaliation in equal measure, including tariffs on US soybeans and aircraft. A US trade delegation arrived in China on Thursday for trade talks.

Trump, who claims the United States is being taken advantage of by its trading partners, has already imposed broad tariffs on imported solar panels and large washing machines.

He recently slapped 25 percent import duties on steel and 10 percent on aluminum. But the tariffs and standoff with China are eroding business confidence. The Institute for Supply Management said on Thursday its national nonmanufacturing index fell for a third straight month in April.

From construction to mining, finance and professional services, businesses complained about the administration’s protectionist measures, which they said made “folks nervous,” and would “cause unintended consequences on all industries.”

The Trump administration argues that the perennial trade deficit is holding back economic growth. The economy grew at a 2.3 percent annualized pace in the first quarter, slowing from the October-December period’s 2.9 percent rate.

The dollar was little changed against a basket of currencies while prices for US Treasuries rose. Stocks on Wall Street were trading lower.