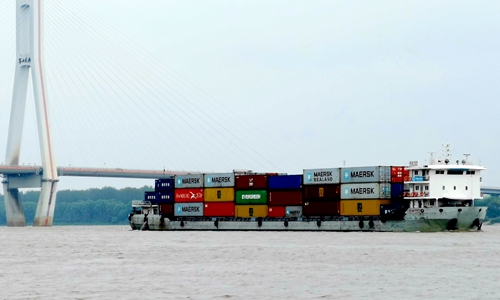 China's first quarter trade data released on Tuesday offered a great deal of signals on a wide range of issues, from the repercussions of the global coronavirus pandemic to the China-US phase one trade agreement and the evolving global trade flows propelled by the virus  in conjunction with trade wars as well as market forces.

Unsurprisingly, the data showed that the COVID-19 epidemic pandemic has inflicted considerable pain on the country's trade - more pain in certain sectors such as machinery and textiles than others like medical supplies, but it also highlighted an increasingly diversified external market for Chinese products, with the Association of Southeast Asian Nations (ASEAN) overtaking the EU to become China's largest trading partner and trade with markets along the Belt and Road Initiative (BRI) steadily rising.

The bottom line is that despite the short-term pain, improving signs are emerging and the COVID-19 pandemic might have inadvertently further lifted up China's trade profile in turn putting the world's largest trading nation in a better position than ever to handle external risks, including phase two trade negotiations with the US, analysts noted.

One unmistakable sign surfacing from China's first quarter trade data is that the US has managed to become both the biggest winner and loser in trade with China. While US farmers, coal miners and oil producers - those covered by the phase one trade agreement - might be cheering due to skyrocketing exports to China, the rest, particularly those who still face hefty tariffs, will certainly feel pain.

In the first quarter, China's imports of US agricultural goods grew by 110 percent, with soybean imports rising 210 percent and pork imports jumping 640 percent. Still, overall imports from the US dropped 1.3 percent.

"There are two points to take away from this data: one, China has been implementing the phase one trade agreement as planned; two, the pandemic and remaining tariffs have caused major losses in bilateral trade," Gao Lingyun, an expert at the Chinese Academy of Social Sciences who advises the government on trade issues, told the Global Times.

"While losses caused by the pandemic are out of our hands, tariffs are a man-made issue for the US that should be addressed. There are many calls in the US for the government to end such tariffs."

As the US continues to battle the epidemicpandemic, US President Donald Trump is facing growing pressure to end his trade war. Last month, more than 100 US businesses wrote to Trump calling for him to suspend tariffs on Chinese-made goods and global steel imports, which they say could boost the US economy by $75 billion.

Such faltering domestic support for Trump in the trade war, coupled with improving signs for China's trade over the past three months, despite the epidemicpandemic, sees Trump at a disadvantage in talks for a phase two agreement, even if he wants to launch one soon to boost his optics ahead of elections, analysts noted.

"Time is on China's side not the US," Gao said, noting that China is open to launching phase two negotiations, "but at this point, China's asking price will not be low."

Also putting China in a more favorable place to cope with the US' tariff war, as well as a deteriorating global trade environment due to the pandemic, is an increasingly diversifying export market for China, analysts noted.

In the first quarter, ASEAN, which is widely expected to be one of the fast-growing regions in the world, has overtaken the EU as China's largest trading partner, with bilateral trade volume rising 6.1 percent to 991.34 billion yuan. ASEAN surpassed the US to become China's second-largest trading partner in 2019.

"This is not surprising at all. It is an inevitable trend," Tian Yun, vice director of the Beijing Economic Operation Association, told the Global Times on Tuesday, adding that trade within ASEAN, China, Japan and South Korean, plus India, Australia and New Zealand, is bigger than that of other regions.

Apart from their geographically close proximity, major players in the region have continued to boost integration in recent years, though internal disagreements remain. China has free trade agreements with many of them, including ASEAN, Australia and New Zealand, with more underway, including what could be the largest deal ever - the Regional Comprehensive Economic Partnership, or RCEP.

In wake of the coronavirus pandemic, some in the region are eyeing even closer cooperation.

If the countries join hands, they could not only be able to effectively stop the virus from returning to the region but also lead the global economy to recovery, analysts said.

"Only a diversified development strategy could lift up China's foreign trade," Wei Jianguo, a former Chinese vice commerce minister, told the Global Times on Tuesday, adding that China should boost trade with ASEAN, the EU, Japan, the US as well as other emerging markets.

In terms of emerging markets, China's massive investment in the BRI appears to be yielding positive results. In the first quarter, Chinese trade with countries along the BRI grew by 3.2 percent, 9.6 percentage points higher than the pace of overall growth.

Still, the COVID-19 pandemic has proven to be extremely painful for many Chinese sectors, including machinery, electronics and textiles. In the first quarter, export of machinery and electronics, which account for nearly 60 percent of China's total exports, dropped 11.5 percent, while export of textiles, garments and other labor-intensive sectors fell 15.3 percent.

The sharp losses were caused by weeks of closures due to the epidemic, but the fast pace of work resumption and a slew of policy support measures have already lifted exports in the last month of the quarter, according to Ming Ming, chief macroeconomic and fixed-income analyst at CITIC Securities.

"Overall, China's trade data for March has exceeded market expectations, with growth in both exports and imports having rebounded significantly," Ming told the Global Times.

In March, China's total trade was down a mere 0.8 percent in the yuan terms compared to a 9.6 percent fall in the first two months.

Behind the rebound is also an emerging reality that the world still needs China's manufacturing sector for everything from medical face masks to daily goods, as the pandemic has shown, despite calls from some Western officials to relocate production outside of China, analysts said.

While China imported more medical supplies during the first two months of the year, when the epidemic was still serious in the country, China has since become the biggest supplier of medical products, with countries around the world, including the US, proactively relaxing restrictions, lowering tariffs and sending planes to pick up supplies from China.

Between March 1 and April 4, China exported a total of 10.2 billion yuan worth of supplies, including 3.86 billion masks, 37.52 million protective gowns and 16,000 ventilators, according to data last week.

"As the pandemic caused production halt in some countries, these countries can only turn to China, which has the most complete manufacturing sector to "help," not only for daily consumer goods but also production materials," Wei said.