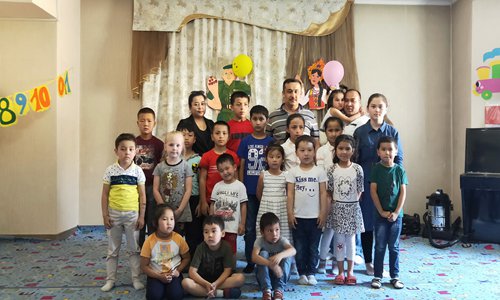 Xieraili Abudu (center in fourth line) and students from his school pose for a group picture. (Photo: GT)

Xieraili Abudu, a 33-year-old businessman of the Uyghur ethnic group from Urumqi in Northwest China's Xinjiang Uyghur Autonomous Region, has a big dream - to open Chinese language schools in all the countries along the Belt and RoadInitiative (BRI) route. Xieraili now lives in Bishkek, the capital of Kyrgyzstan. His family has been trading textiles between Kyrgyzstan and Xinjiang for more than 20 years. He used to look after the family business, but started running a school in 2015.Xieraili's decision in launching a Chinese language school follows the growing trend of learning Chinese in Kyrgyzstan.  "There are many Uyghurs coming from Xinjiang to do business in Kyrgyzstan. There were few opportunities for their children to learn Chinese in Bishkek. I did not think the situation was good for their future, and I started the school to teach them standard Chinese language," Xieraili told the Global Times. "As Chinese, we should learn Putonghua, no matter which ethnic group we are from and where we live now," Xieraili said.Xieraili's school has both a kindergarten and a primary school. Since 2015, 36 students have graduated from the kindergarten and 23 of them went on to the primary school.The school now has 110 students of six ethnic groups from China and Kyrgyzstan aged from 18 months to 10 years old. The daily curriculum includes Chinese, English, Kyrgyz, Russian, math and other classes, including drawing. Of the 14 teachers, some are recruited from the Confucius Institutes in Bishkek and others are local graduates."We now have more than 100 students from different ethnic groups and countries in the school. The teaching materials we use are from China, and some were introduced by teachers from the Confucius Institutes in Bishkek," Xieraili said.Xieraili's Chinese school has gained some fame in Bishkek in recent years. More people living in Kyrgyzstan are willing to learn Chinese as bilateral ties improve and many Chinese companies come to do business or launch projects under the BRI. The average salary for people living in Bishkek is about $200, while working in a Chinese company can bring them about $500 a month, according to some college graduates in Bishkek interviewed by the Global Times.Xieraili's school has not only taken in students living in Bishkek but also local residents who want their children to learn more Chinese culture.

Setting up the school was not an easy task for Xieraili, as some of his family members did not support him at the beginning.Xieraili's wife was initially opposed to his decision to open the school, as he used to earn more than 2 million yuan ($291,120) a year running the family business."I kept telling them this is the right thing to do for our ethnic group. When many foreigners are eager to learn Chinese, why are some of us Uyghurs, as Chinese people, not learning it? The future of our children lies in the motherland," said Xieraili.Many Chinese citizens from the Uyghur ethnic group reached by the Global Times in Bishkek shared similar opinions as Xieraili, saying their children are now encouraging them to speak more in Chinese.As Uyghurs living overseas, Xieraili and his friends are always asked about their attitude toward China's current anti-terrorism and de-radicalization policies, including the vocational training centers.Xinjiang's regional government has launched vocational training centers, which offer knowledge on national laws, standard Chinese language and de-radicalization knowledge to those who have been influenced by extremism. The Chinese government has explained that the move is part of the regional government's efforts to fight against extremism, but is often attacked by Western media. Xieraili and his friends understand the Xinjiang regional government's efforts. "I used to meet some young people in Xinjiang who dropped out of school at a very early age and were even misguided by some extremist religious ideas. They had few vocational skills and could not speak standard Chinese language. The training centers are set up to help those who have gone astray," Xieraili said.He noted that he goes back to Xinjiang several times a year, and in recent years has felt some changes in his hometown. "Our community has become more beautiful and the security situation improved. The educational level of people has also been improved," Xieraili said.