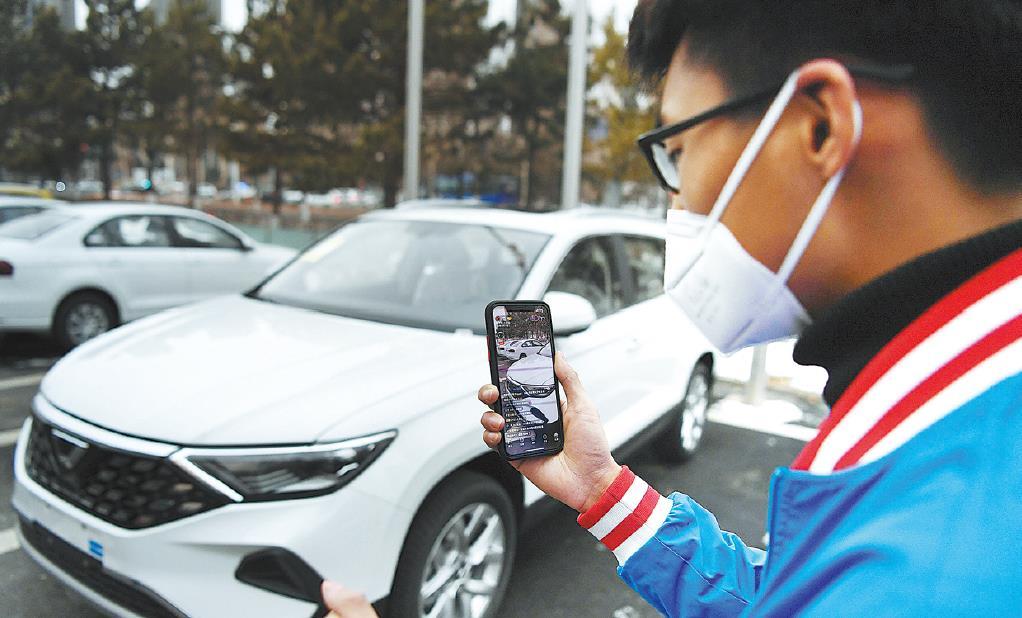 The coronavirus has changed the way many industries operate, not least the way that cars are being marketed, as dealers take to online platforms to promote sales. Over the past months, dozens of carmakers have launched models online, and tens of thousands of dealerships across the country are selling cars via livestreaming.

"Chinese customers always have their smartphones at their side. That's why online consultation was already well-established and accepted before COVID-19," said Michael Mayer, head of sales and marketing for Volkswagen brand in China, in an article on its website.

The trend became more evident when people stayed at home as the pandemic reached its peak. Data from Quest Mobile, a big-data company in Beijing, show that the time people are spending on the internet has increased 21.5 percent since the outbreak started.

Volkswagen said it sold a total of 550 cars in March in a completely digital process.

The carmaker said the sales were made possible by virtual showrooms where customers could see the vehicles and inquire in real-time about their prices and equipment.

More than 2,000 Volkswagen dealerships are also presenting their current model line-ups via livestreaming, some of which can reach thousands of viewers.

In February, Volkswagen trained more than 70,000 participants during a three-day online course in the use of live broadcasts and the production of short videos.

"On average, dealers present a new show every other day on platforms such as TikTok or Kuaishou," Mayer said.

Car salespeople need new skills in this world. Good product knowledge remains the basis, but if you want to be successful, you have to appear in livestreams like a type of TV presenter. "Car salespeople are becoming entertainers," Mayer said.

"The competition is tough," he added. "Those who want to be found must always offer something new."

In China, a young man named Li Jiaqi is believed to know lipstick better than anyone. Almost every night, millions of girls and ladies wait for him to appear online and introduce new lipsticks. Orders are placed even before the show is over.

Li was invited in April to help market Cadillac's CT4. Despite the huge number of online viewers, none of them placed an order on the vehicle priced around 200,000 yuan.

Li, who reportedly does not hold a driving license, even called hubs by the wrong names.

Another online celebrity named Weiya, who sells household commodities like Li, helped attract orders for Roewe RX5 plus: 4,180 were sold in 30 seconds. The key, said industry insiders, was the discount.

They say the rule of the game is that the contract will require the sellers to give the celebrities the biggest discount for a period of time before and after the shows to ensure the products will be sold, which will save the faces of both the sellers and the celebrities.

Under condition of anonymity, a marketing manager at an international carmaker told China Daily that she knows livestreaming with online celebrities won't help sales.

"In fact, if you give dealers the same discount, they may sell even faster," she said.

"If livestreaming is of any use, I would use it to tell brand stories instead of selling cars. A lipstick is affordable for anyone, but a car is different."

"But bosses do not want their brands to remain silent during the pandemic, especially when others are seemingly have a good time in the limelight," she said.

Nio said the 40-minute live show on May 18 brought in a total of 320 orders, 5,288 test-drive appointments and sales valuing 128 million yuan. Orders continued to grow after the show and sales reached nearly 150 million yuan by the next day.

WM said its online launch of the EX5 SUV on May 10 garnered 1,400 million views, which is one tenth of China's total population. In two days it received over 4,000 orders, and more than 30,000 people showed interest in the model.

He Xiaopeng, founder of Xpeng Motor, said "Many people ask me when Xpeng will do livestreaming. I am worried that it will become a data-falsifying show. Everyone knows that the data is exaggerated. But if you do not do it, you will feel you are shortchanged."

"Luxury is something you have to feel yourself. Livestreaming will not do."

She said she hoped the pandemic would end as soon as possible and everything would return to normal, with reporters huddling at new car launches and visitors kicking tires at dealerships.

Mayer, the head of sales and marketing at Volkswagen, said digitalization will continue, but that does not mean Volkswagen will make online sales the standard.

He said it is more important to digitalize further process steps and thus work in a more customer-friendly and cost-effective manner. He said shortly before closing, many customers still wished for a personal meeting with their salesperson.

"They expect that they can negotiate the price. That works best on site. For this reason, we plan to have separate meeting corners in new car dealerships. Even if digital continues to spread, the human aspect must not be forgotten," Mayer said.