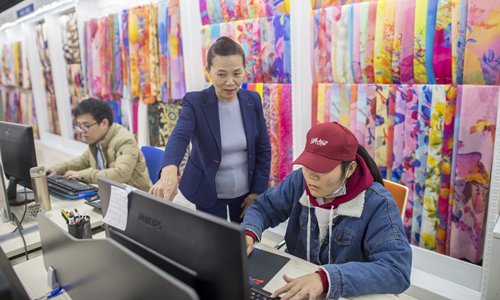 Twists and turns in US-China trade talks are having a much milder effect than expected on businesses in the Yiwu International Trade City in East China's Zhejiang Province, one of the nation's best-known small commodity markets, traders there told the Global Times on Monday.

It's quite unlike the situation in the financial markets.

On Monday afternoon, one of her shops was bustling. Two buyers from Mexico were choosing among the hundreds of umbrellas on display. According to Zhang, this one shop gets about seven or eight groups of overseas clients on average each day.

Zhang said she currently only has about five US clients, compared with hundreds in some European countries. So far, she has not been asked by any of her US clients or intermediate trading companies to change her prices because of US tariff increases, she said.

But even if it happened, it wouldn't cause her much loss as her clients are widely scattered all over the world. "It's characteristic of Yiwu small commodity traders that we rarely depend too much on one or several markets. We don't put all our eggs in one basket, so that even there's trouble with one market because of unpredictable factors like political fluctuations, our business won't be affected too much," she said. She sells umbrellas to buyers in more than 100 countries and regions, Zhang said.

US officials on May 10 increased an existing 10 percent tariff on $200 billion in Chinese products to 25 percent, breaking a truce reached by the leaders of the two countries in December 2018. The tariff increase covers almost everything from daily necessities to leather products.

The US also threatened over the weekend to slap a 25 percent tariff on almost all the remaining $325 billion worth of goods imported from China, according to media reports.

Chen Lixiu, owner of Junxi Bags, a handbag shop in the trade city gets about 5 percent of her orders from the US. All of her bags are exported. She said that because the proportion going to the US is not high, her losses are limited because of the tariff increase.

According to Chen, her profits have fallen by about 1 percent on sales to the US because of the tariff increases. "The additional costs ... are shared all along the industry chain. Our US clients have asked us to lower export prices, while also raising prices at which the products are sold to their end customers. We are also beating down the prices sought by the manufacturers. It's likely everyone has earned a little less under the current situation," Chen told the Global Times.

She said that as a seller who depends on exports, she has to accept the situation and make compromises to keep her business going. She also said she won't reject US clients because of the tariff changes.

Many Yiwu merchants are modifying their business models to cope with the rising uncertainties, not only stemming from the China-US trade dispute but also from the slowdown in the world economy.

For Zhang, the solution lies in the expansion of overseas markets, especially European countries along routes of the Belt and Road Initiative (BRI), which has facilitated her business in terms of shipping and other conditions.

According to Zhang, the US companies have shown a tendency to have Chinese businesses to do cheap, low-end original equipment manufacturing (OEM) for their own brands, something that she has resisted. "For one thing, doing OEM work, which usually means making high volumes and low profits, often leads to overdependence on certain markets. Second, the values of products would be very low, which I don't want to see."

Some merchants in Yiwu have also taken steps such as turning to imports or expanding customer sources to cope with trade pressure, they told the Global Times recently.

Song Guoyou, director of Fudan University's Center for Economic Diplomacy, told the Global Times on Monday that small traders in Yiwu should not only focus on the US market.

They could expand to other countries and regions such as markets along the BRI routes and in Europe and Japan, Song noted.

"Chinese businesses are expected to negotiate with their US buyers to see if the US companies can shoulder the burden of tariffs," he noted.

Gao Lingyun, a research fellow at the Chinese Academy of Social Sciences' Institute of World Economics and Politics, also said that Chinese central and local governments can help small businesses hedge the pressure of US tariffs by further reducing taxes and fees, as well as improving the domestic business climate.