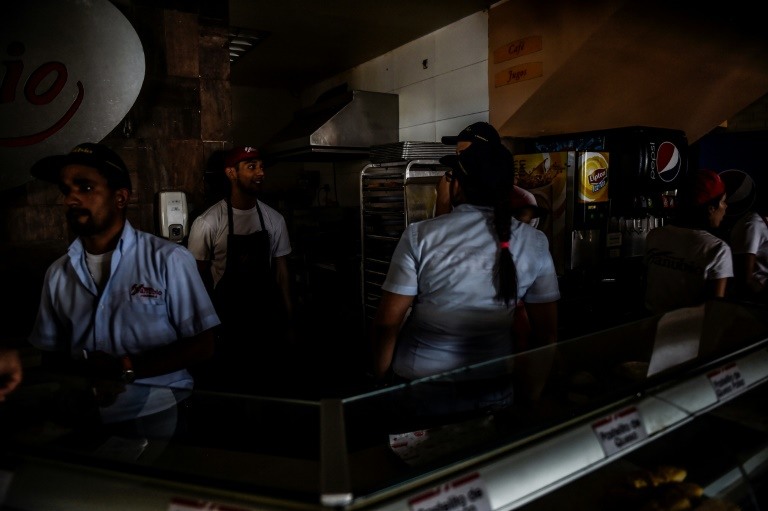 Employees stand inside a fast food shop during a power cut in Caracas, the capital of crisis-hit Venezuela, which saw its economy shrink by a massive 16.5 percent in 2016. Photo: AFP

Venezuela's economy shrank a massive 16.5 percent in 2016, according to an official government filing to the US Securities and Exchange Commission (SEC).

The oil-rich but impoverished country attributed the collapse to a contraction of 9.9 percent in the oil sector and 16.1 percent in the non-oil economy.

The 150-page report, received on Thursday by the SEC, also reported inflation at 274.4 percent, and an unemployment rate of 7.5 percent in the calendar year ending on December 31, 2016.

And it revealed a sharp drop in Venezuelan imports in 2016, when purchases totaled $16.4 billion, half of the $33.3 billion of the previous year.

"Since 2015, there has been increasing political and social unrest due to shortages of basic consumer goods as a result of a drop in domestic food production; limited access to imports as a result of currency restrictions; smuggling; hoarding and other distribution problems," the report noted.

The SEC requires detailed economic filings from foreign governments that issue their debt in the US.

Venezuela is going through an acute economic crisis that intensified in 2014 with the fall in oil prices, the source of 96 percent of its export revenue.

There is a major shortage of food and medicines and a hyperinflationary spiral that, according to analysts, will exceed 2,000 percent in 2017.