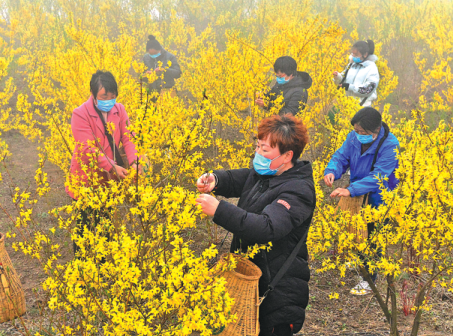 When the forsythia flowers bloom in March and April, Caozhuanggou village in Pingshun county, Shanxi, becomes a destination for many sightseeing tourists.

The small flowers are not eye-catching when there are one or two trees on the roadside. However, they make a spectacle when vast slopes are covered by such yellow blossoms.

For Liu Junping, Party secretary of the village, forsythia is an even bigger industry than mere sightseeing.

He said forsythia has been a valuable medical herb for hundreds of years as its seeds, roots, stems, petals and leaves can be used to produce traditional Chinese medicines.

Liu has been engaged in the collection, planting and sales of the herb for eight years.

"People usually collect the herb in the wilderness," Liu said.

However, the village chief decided to establish an artificial plantation this year as the authorities of Shanxi announced it would develop the herbal tea industry as one of its local economic pillars.

Lou Yangsheng, Party secretary of the province, and Shanxi Governor Lin Wu attended a promotional fair for local herbal teas in Taiyuan on March 20. They urged for the herbal tea industry to be developed into one of the pillars of the rural economy in Shanxi to boost growth and help farmers increase their incomes. 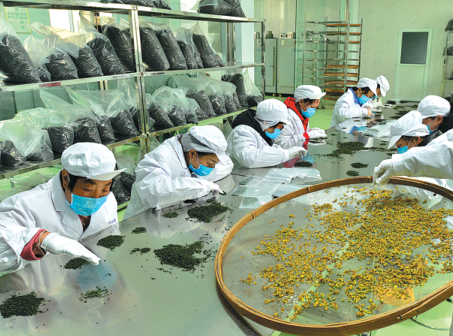 Workers at a tea company in Zezhou county separate forsythia leaves and petals for the production of different herbal teas. [Photo by Liu Tong/For China Daily]

Lou, who calls himself a "branding envoy" for Shanxi's herbal teas, said he is confident of the market potential of the tea products of Shanxi because they have a long history and many health benefits.

Herbal teas developed from ingredients like forsythia can help clear away heat and toxic substances. They are also good for sleep and digestion, said Wang Cheng, vice-governor of Shanxi who was also at the promotional fair.

"I want to establish a base for forsythia production," Liu said. He added that his ambition is to develop a longer industrial chain for herbal tea production, tea culture and sightseeing.

Yang Hongping, a local agronomist and deputy chief of the county's committee of the Chinese People's Political Consultation Conference, is helping Liu realize his dreams.

Yang's jobs include teaching Liu all the skills and knowledge for domesticating and growing such wild herbs.

Yang said he is optimistic about the market potential of the forsythia industry.

"The prices of forsythia products have kept growing steadily in recent years," Yang said. He added that the small investment and low costs of operation as well as the preferential policies from the government will bring more benefits to growers.

Liu said his small farm is only of a trial nature this year. "Once the operation is successful, more farmers will be engaged in the industry," he said.

Wen Yuan and Niu Hui contributed to this story.