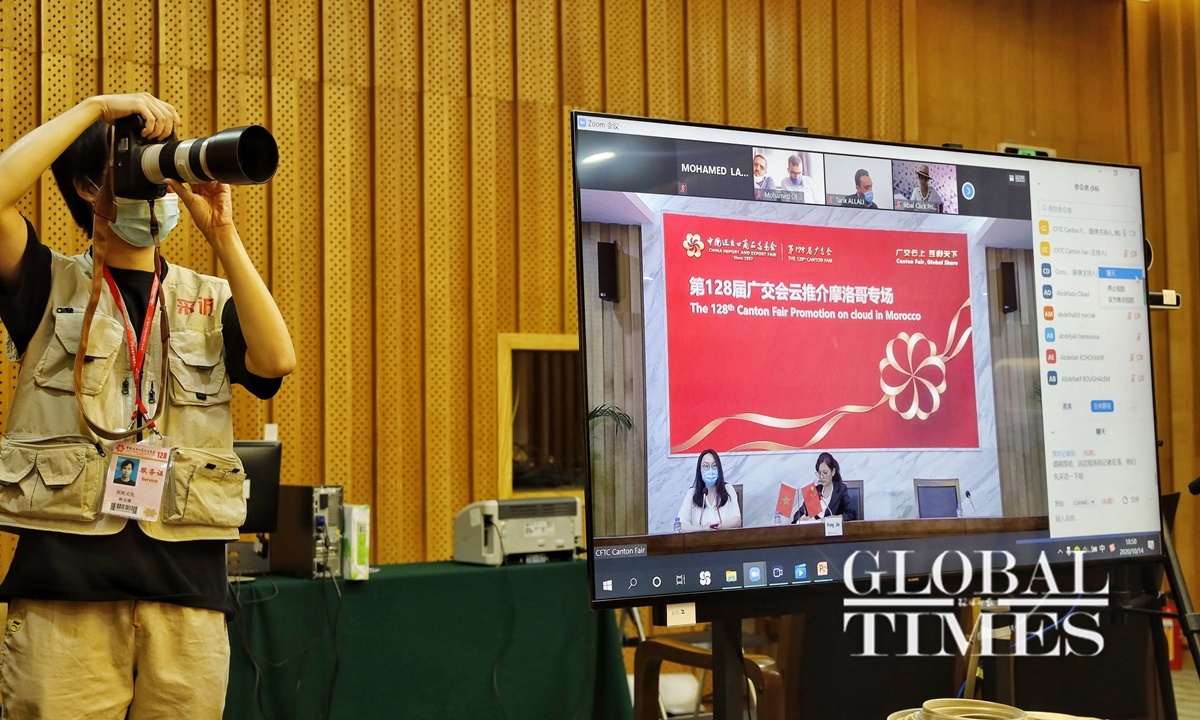 Empty exhibition halls, vacant parking lots and very few people pass by - no hustle and bustle, just data flowing on the display screens, and 26,000 traders and exhibitors displaying and browsing 2.35 million items virtually in the command center in Guangzhou, capital of South China's Guangdong Province. Indeed, this is "ground zero" for the Canton Fair, one of the world's largest trade shows.

On the day Chinese President Xi Jinping wrapped up his inspection tour to Guangdong, the Canton Fair kicked off in the pioneering province and manufacturing base, demonstrating the vibrant rhythm of the world's factory.

Since the COVID-19 outbreak hit the world, disrupted international travel and restricted face-to-face meetings, many great trade shows and business summits were postponed or even canceled, but China has managed to keep the Canton Fair - formally known as the China Import and Export Fair - alive by moving it online.

The 128th session of the Canton Fair, which kicked off on Thursday, still managed to draw roughly the same attendance numbers recorded in the spring session held in June. Exhibitors uploaded a total of 2.35 million items to online showrooms, of which 700,000 were new products.

For many, the continuation of the trade fair bears special significance.

"Looking at the perspective of the world economy, last year was already a bad year. This year, with the COVID-19 pandemic, everyone has suffered," said Karim Trachen, director of Moroccan company EASYDIS. "It's a businessman's job to try to pull the economy back up again. So, I will buy more and I think that's what consumers want to see."

"I'll purchase more because I have more time to see more products online," Trachen told the Global Times on Thursday, saying that his company will buy more smartphones and consumer electronic products.

Such spirit is sorely needed at a time of global economic woes, the worst crisis since the Great Depression.

In its latest World Economic Outlook report, the IMF on Tuesday projected that the global economy will contract by 4.4 percent in 2020, with losses estimated at $11 trillion over the 2020-21 periods.

Although the forecast is 0.8 percentage points above its June forecast, the lingering prospect of a second-wave coronavirus strike in the coming winter and the absence of effective vaccines further weigh down the global economy and trade.

However, some exporters attending the Canton Fair see the current landscape with hopeful eyes.

Li Yansong, a manager with Guangzhou Magi-Wap Culture Articles Co, told the Global Times on Thursday that more orders for his company's products (color paint used for painting) have been placed compared to last year, benefiting from some of the unique traits of a world economy under lockdown.

"Year-to-date orders have surpassed the whole-year record for last year, even though it is only October," said Li. "Our 50,000-square-meter factory is 'running on all cylinders,' demand just piles up — more people are turning to artistic pursuits when confined in their homes."

Li said his friend, who sells flower pots, also saw his business blossom with backlogs stretching through to 2021 as more people turn to gardening while another, who exports musical instruments, has seen an on-year increase of 70-80 percent in orders.

The stories of Li and his friends are echoed by China's strong trade figures for the first nine months of the year. 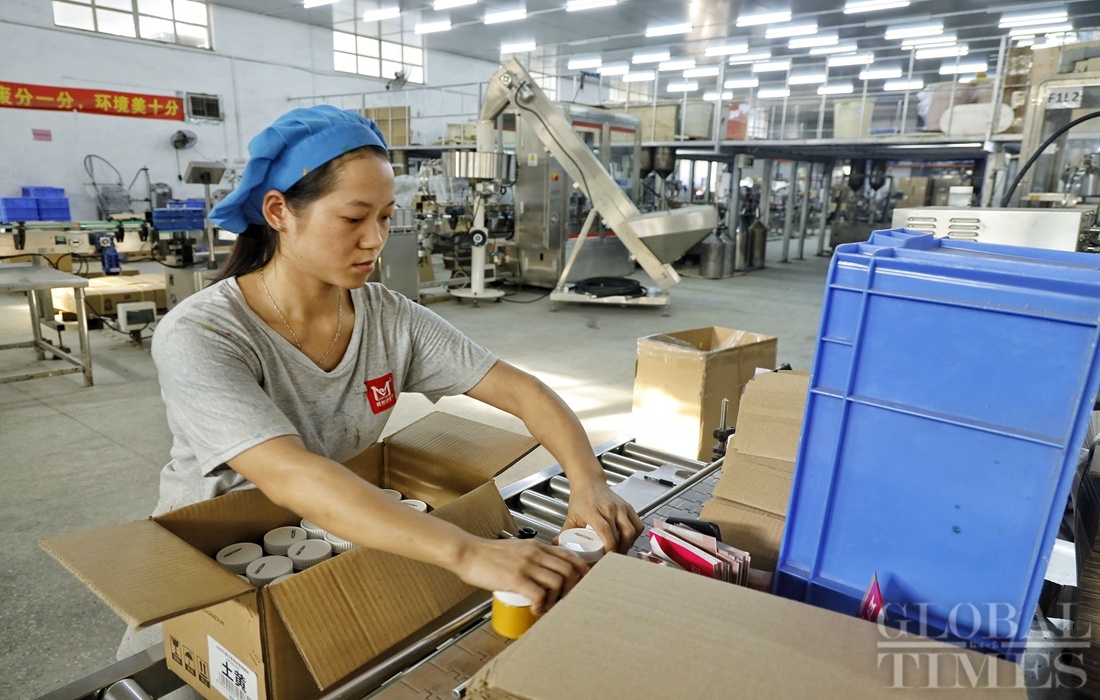 In September, China's exports grew for the sixth month in a row, as the third quarter saw record foreign trade volume, including a 10.2 percent year-on-year growth in exports and 4.3 percent growth in imports, while overall foreign trade performance was "markedly better than expected," the General Administration of Customs (GAC) said on Tuesday.

The expansion has been supercharged by high exports of medical equipment, home appliances and consumer electronics, according to GAC.

IMF said all major economies will see a sizable contraction for 2020. China, which is forecast to grow by 1.9 percent in 2020, however, will likely be the only economy to see growth this year.

"China is getting back on its feet in terms of foreign trade, which means a great deal to the global market, as it can sustain the consumer lifestyle held by many while in lockdown," noted Li, adding he believes the fourth quarter exports will continue to climb.

China's recovery - as the largest trading partners of more than 120 countries and regions - means a lot to the recovery of the global economy.

During his inspection tour to Guangdong, President Xi emphasized in a speech on Wednesday that China will continue opening up to the world and focus on innovation, fueling expectation around the world about China's growth potential.

Some observers have seen the successful opening of the Canton Fair as bearing two major themes of the Chinese economy in the years to come: opening-up and a development model spearheaded by innovation.

South Korean exporters are pinning their hopes on China and ASEAN members spearheading the world's recovery, the Korea Herald reported on Thursday.

According to a poll of 1,051 South Korean exporters, some 20 percent believed China, South Korea's largest trading partner, will show the best improvement in terms of trade climate in the fourth quarter and near future. The same poll found South Korean exporters are seeing worsening conditions for the US, the EU and Japan.

Under the pandemic's influence, not everyone is as lucky as Li and his friends, however.

Fu Shaohua, a sales manager from bag and luggage exporter Guangzhou Kingsons Bags Technology Co, said her company has recorded a 70 percent slump in orders at the Canton Fair this autumn compared to the last year's fair.

Many overseas clients are not familiar with virtual trade shows and traffic has therefore declined, Fu said.

Yet a cloud-based trade show seems to be the only option at this point in time. Even in China, where the virus has been largely put under control, the government is not lowering down its guard.

After the National Day holiday season, during which 637 million trips were recorded, the East China city of Qingdao was hit by a fresh outbreak of the coronavirus, with 78 COVID-19 cases confirmed as of Thursday. The city is now testing all of its 11 million residents.

Mehdi Laraki, chairman of the Chinese Business Council of Morocco at the General Federation of Moroccan Enterprises, told the Global Times that holding an online fair amid the  pandemic is a great opportunity, as it also helps accommodate businesspeople who don't want to travel or don't have a travel budget.

"I think China has been a ' trailblazer' in the sense that the country is well accustomed to novelties such as 'cloud expos' and 'livestreaming e-commerce,' but many of our customers are apparently finding this whole online expo and procurement thing a new experience, and they need some time to get used to it," Li said, noting that one of the benefits of having the Canton Fair "on the cloud" is that it saves booth rent of up to 300,000 yuan ($44,577) otherwise required in a brick-and-mortar setting.

Trailblazing is the role that China is heading to fill. Indeed, a virtual trade fair would be unthinkable if it were not for China's well-founded digital infrastructure, its know-how in e-commerce platforms and its strengths in artificial intelligence.

The country also displayed its ambitions in financial technologies by trialing its cutting-edge central bank digital currency this week in Shenzhen, a vast Special Economic Zone in Guangdong, which has economic output trailing that of South Korea, the world's 10th largest economy.

Yi Zhe, a manager at a LED turnkey project service provider based in Shenzhen, CLT LED Display, said the cloud-based Canton Fair still has technical glitches that need to be improved, but his company believes virtual trade shows will become a "new normal" in the coming years.