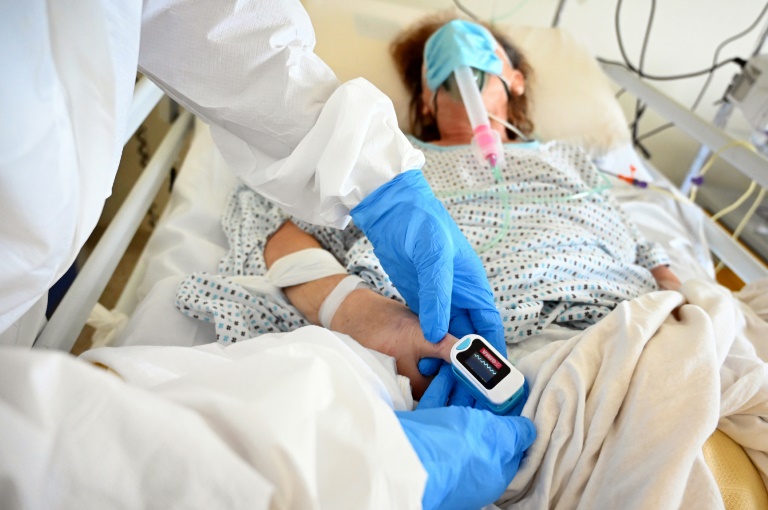 Successful drug tests may provide a better treatment for severe coronavirus cases, but until there is a vaccine the crisis will continue. (Photo: AFP)

A day without a new coronavirus case in South Korea and a potential breakthrough in the hunt for a better treatment spurred optimism on Thursday, but catastrophic European figures underlined how much damage the epidemic has already done the global economy.

World financial markets picked up a little on the news on the medical and public health fronts, but deaths continued to mount across much of the world and some of the biggest economies are facing perhaps the most severe recession of the modern era.

Thursday brought stark official figures from Europe, where the locked-down EU economy was estimated to have shrunk by 3.5 percent in the first quarter, Germany's jobless total soared to 2.6 million in April from 2.3 million the month before and France confirmed that it had officially plunged into recession.

The European Union's commissioner for the economy, Paolo Gentiloni, dubbed the situation "an economic shock without precedent in modern times" and official agency Eurostat said the first quarter contraction in the bloc's output was the most severe since its statistical series began in 1995.

Germany "will experience the worst recession in the history of the federal republic" -- founded in 1949 four years after World War II left the continent shattered and divided -- Economy Minister Peter Altmaier warned, predicting that Europe's biggest economy would shrink by a record 6.3 percent.

The novel coronavirus strain that emerged in China in December has now killed more than 224,000 people and spread to 193 countries and territories. Reporting standards vary across jurisdictions, but more than 3.1 million cases have been recorded and testing rates are increasing.

Markets nevertheless climbed cautiously higher on Thursday -- buoyed by news from Asia, where some of the formerly worst-hit countries have begun to reopen their economies and rebuild everyday life, and the United States, where scientists reported hopeful results in trials for an anti-viral drug.

For the first time since the new COVID-19 disease was detected there in mid-February, South Korea -- which for a period had the world's second-largest outbreak -- reported zero new infections, suggesting its aggressive test-and-trace strategy is having results.

"This is the strength of South Korea and its people," President Moon Jae-in said as he announced the milestone.

South Korea's death toll is around 250 -- vastly lower than that of Italy, Britain, Spain and France, which have each recorded at least 24,000 fatalities, and the United States, which tops the table with a third of global deaths.

Spain may be past the worst of the crisis, however, and is among the European countries planning a staged return to normal economic and social life next month. It recorded 268 deaths on Thursday, the lowest daily toll since March 20.

But in Russia, coronavirus cases surged past 100,000 on Thursday and officials warned that infections had not yet peaked as they extended lockdown measures.

Stuck in cramped flats and struggling with fears of the coronavirus and its economic impact, many Russians are worried about the return of an old demon.

"When I found myself alone at home, the first thought I had was 'ah, it's a good time to get drunk'," says Tatyana, a recovering alcoholic on lockdown in Moscow.

Iran is also still suffering a serious outbreak. The number of deaths in the country officially passed 6,000 on Thursday.

Meanwhile, in the first evidence of successful treatment, a US clinical trial of the drug remdesivir showed that patients recovered about 30 percent faster than those on a placebo.

"The data shows that remdesivir has a clear-cut, significant, positive effect in diminishing the time to recovery," said Anthony Fauci, the top epidemiologist in the United States.

The drug failed in trials against the Ebola virus, and a smaller study, released last week by the WHO, found limited effects among patients in the central Chinese city of Wuhan, the disease's original epicentre.

Fauci likened remdesivir to the first retrovirals that worked, albeit with modest success, against HIV in the 1980s, but it is a treatment not a vaccine.

Other labs around the world are searching for a vaccine, and some have reported potential progress, but success could be months or years away and experts warn that only a vaccine will will allow the full removal of restrictions that this year put half of humanity under some form of lockdown.

The US announced Wednesday that economic output collapsed 4.8 percent in the first quarter -- ending more than a decade of expansion. Federal Reserve chairman Jerome Powell warned worse was to come, and economic activity will likely drop "at an unprecedented rate" in the second quarter.

The International Labour Organization said half the global workforce -- around 1.6 billion people -- are in "immediate danger of having their livelihoods destroyed".