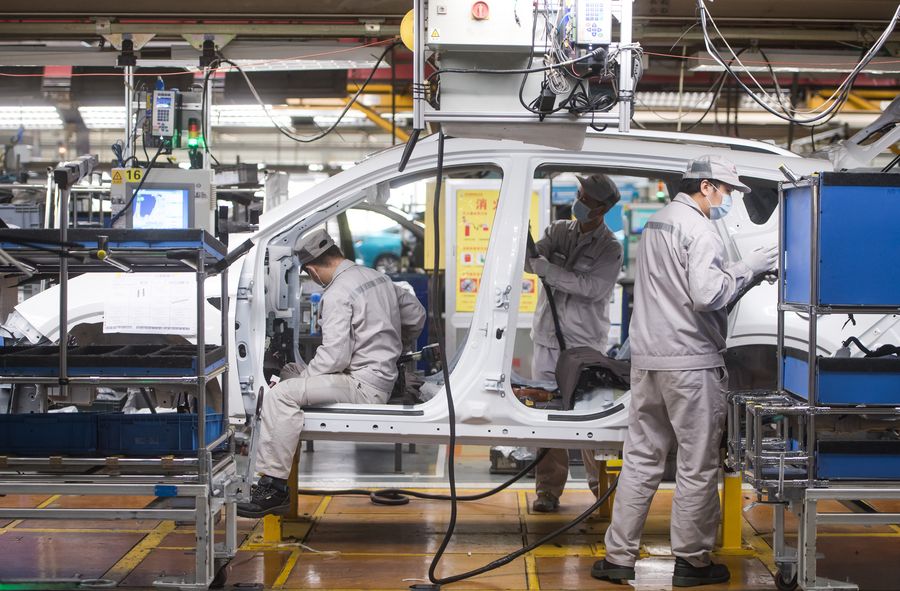 The country's economic and social development witnessed overall stability in Q1, the NBS said at a press conference, while acknowledging that the COVID-19 outbreak had posed a severe test.

A breakdown of the data showed output of the service sector, which accounted for nearly 60 percent of the total GDP, dropped by 5.2 percent, while primary industry and the secondary industry saw a decline of 3.2 percent and 9.6 percent, respectively.

"The situation of epidemic control and prevention continued to improve with a basic interruption in epidemic transimission at home," the NBS said, adding that the resumption of work and production has accelerated and fundamental industries are growing steadily.

China's value-added industrial output, an important economic indicator, fell 8.4 percent in the first quarter of this year, as the novel coronavirus outbreak deals a huge blow to industrial production, data from the National Bureau of Statistics showed Friday.

China's retail sales of consumer goods, a major indicator of consumption growth, declined 19 percent year on year in the first quarter of this year as the novel coronavirus outbreak hit the economy, the National Bureau of Statistics (NBS) said Friday.

China's fixed-asset investment (FAI) declined 16.1 percent year on year to 8.41 trillion yuan (about 1.19 trillion US dollars) in the first quarter of 2020, the National Bureau of Statistics (NBS) said Friday.

China's investment in property development declined 7.7 percent year on year in the first quarter of 2020, narrowed from the 16.3-percent drop in the first two months, the National Bureau of Statistics said Friday.