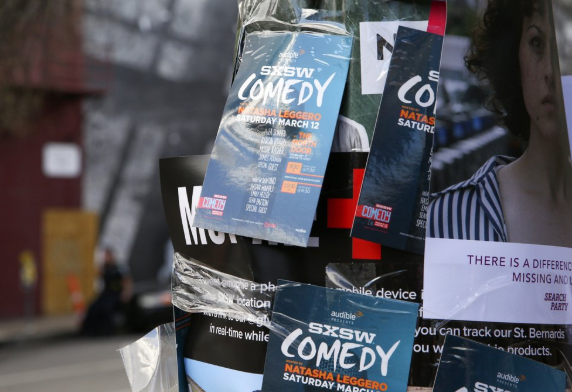 Flyers advertising comedy on a light pole on Sixth Street during South By Southwest in Austin, Texas in 2016. (File photo: AP)

Hutchings, a bartender and performer, had lined up gigs in advance of the South by Southwest film, music and technology festival, which draws hundreds of thousands of visitors to Austin each year. She’d expected to earn about $3,000 — enough to pay her taxes and buy a new sewing machine for a tailoring business she runs.

Relaxed, she sat down to watch a movie. Then her phone started vibrating. Cancellations rolled in. One by one, the jobs she’s been counting on were gone. In the face of the spreading coronavirus outbreak, Austin officials had called off the festival just as the first attendees had begun to arrive.

“In 15 minutes, things fell apart,” Hutchings said. “To watch it vanish, all at once, was shocking.”

As Hutchings and hundreds of millions of Americans can attest, damage from the coronavirus has pummeled the US economy with breathtaking speed and force. Hour by hour, day by day, the activities that households take part in and spend money on — plane trips, sporting events, movies, concerts, restaurant meals, shopping trips for clothes, furniture, appliances — are grinding to a halt.

And so, it seems, is the US economy.

Just a month ago, experts had expected any severe economic pain from the outbreak to be confined mainly to Asia and Europe. The US economy, enjoying a record-breaking 11-year-long expansion, would likely keep cruising, it was thought — a bit bruised but not seriously damaged.

“The expansion is under threat,” said Philipp Carlsson-Szlezak, chief economist at the Boston Consulting Group. “There’s a very plausible risk this will amount to a recession.”

On Wednesday, Wells Fargo Securities had predicted a slight drop in the nation’s gross domestic product — the broadest measure of economic output — in the April-June quarter. The next day, as the American stock market endured its deepest plunge since 1987, Wells Fargo economist Jay Bryson wrote that it was “painfully obvious that we need to rethink this forecast” and further downgrade the outlook.

How did the picture darken so sharply, so quickly?

The speed of the virus’ spread appeared to surprise economists as it hopscotched to 117 countries, including the United States, infecting a documented total of roughly 150,000 people worldwide and killing more than 5,500. And what health experts agree was the US government’s fumbling early response to the crisis has undermined the confidence of consumers, investors and businesses. Anxieties have escalated.