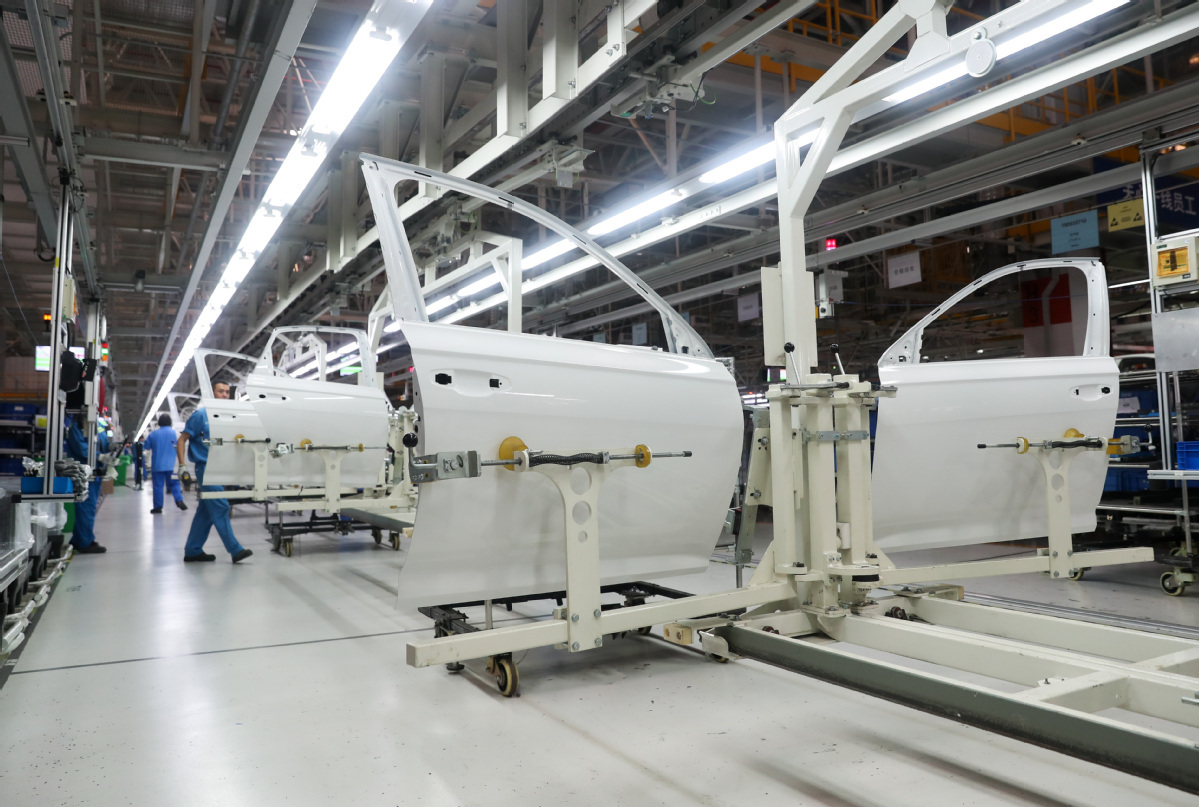 Workers on the production line of SAIC Volkswagen in Shanghai. (Photo: Xinhua)

Carl Hahn, the 95-year old former chairman of Volkswagen Group, did not expect that a quick decision he made in 1982 would prove to be one of the most rewarding and far-reaching ones for the German carmaker.

The decision he made then was to produce cars in China. And he made it within two weeks of his taking the helm at the Wolfsburg-headquartered carmaker in January of the same year, said Hahn.

Back then, there were no global carmakers in China, which had just started to become the kingdom of bicycles. In 1982, Volkswagen sold around 2 million vehicles and none of it was in China. Last year, China accounted for over 40 percent of the German carmaker's global sales, with 3.85 million Volkswagen vehicles sold in the country.

But Hahn's visionary move was a risky one in the eyes of many, including some executives at the German carmaker itself.

When a Chinese delegation went to seek cooperation with global carmakers in 1978, most did not see a chance of success and turned down the proposal.

Even Volkswagen, which had started talks with China before Hahn's arrival, remained hesitant because of its lackluster financial performance.

"Most Western auto professionals did not believe that anyone could achieve success under such circumstances. Furthermore, China back then lacked the necessary knowledge and technology for the development of the automobile industry," said Hahn.

"Due to my fascination with the 5,000-year old Chinese history, and my confidence in the strategies and policies being implemented by Deng Xiaoping, I regarded China as a truly unparalleled opportunity that Volkswagen Group could not miss," he said.

A year later, in 1983, a Santana sedan, which was one of first sedan memories for many Chinese, rolled off an assembly line in Shanghai. In 1984, a deal was inked for the first ever Sino-foreign passenger car joint venture, SAIC Volkswagen.

Yan Guangming, a senior Shanghai-based reporter who has been covering the industry since 1984, said the partnership paved the way for China's passenger car industry, by setting up a car manufacturing system, which later became the industry norm, and helping build a local industrial chain.

"My colleagues said at the very beginning of this joint venture project that our joint venture plant had to be the best in Asia－better than plants in any other countries, including Japan," said Hahn.

But Volkswagen's strict quality standards made some local Chinese suppliers unhappy, and they even mistakenly thought the Germans were being mean to them by rejecting their products, said Li Anding in his book A Tale of Cars in China.

But the suppliers were soon moved, when Volkswagen mobilized its retired engineers to China helping solve the problems free of charge, SAIC Volkswagen's former president Wang Rongjun was quoted in Li's book.

When the joint venture scaled up its production capacity to 100,000 units in the early 1990s, over 90 percent of its parts were already made in China, said Li.

As the initial efforts were paying off, Hahn decided to build a second joint venture with China, and this time it was with FAW, producer of the famed Hongqi models, in Changchun, Jilin province.

Before the partnership deal was signed in 1990, FAW had produced Volkswagen's Audi models for two years. And the joint venture, which was the largest of its kind then, has boosted Volkswagen's position in China's auto market.

FAW-Volkswagen's Jetta sedans, which started to roll off production lines in 1991, were the first vehicle to be owned by many Chinese families. Over the next three decades, sales of the model exceed 4 million units in China.

Thanks to the Santanas and the Jettas, the Volkswagen brand is one of the first to spring up in the mind for many, thanks to their childhood memories, thus lending it an advantage over latecomers including Toyota, Ford and GM.

Its efforts to meet local customers' demands, such as introducing latest models and tailor-making its vehicles for China, further fueled its lead in the race as more carmakers poured in.

The Audi A6 sedan, produced by FAW-Volkswagen in 1999, was the first vehicle to have a longer wheelbase and thus more legroom than the same model in overseas markets.

Stephan Woellenstein, CEO of Volkswagen Group China, said the change was thanks to the finding that the decision-makers for car purchases are usually the second-row seat passengers.

The change was hugely rewarding, making Audi, which was less popular than BMW and Mercedes in other markets, a long-standing sales champion in China's premium vehicle segment.

The two rivals soon followed suit by extending their wheelbases as well. Nowadays, almost all international carmakers, both premium and volume ones, offer long-wheelbase models in China.

Despite the fierce competition, the two Volkswagen joint ventures are the bestselling ones. Last year, FAW-Volkswagen was the only carmaker that sold over 2 million vehicles in the country. Volkswagen has delivered over 45 million units to Chinese customers since the group's arrival in the early 1980s.

"To some extent, Volkswagen and China's auto market are indispensable to each other's success stories," said Yan.

Asked about the top factors behind Volkswagen's success in China, Woellenstein said one of them would be Hahn's visionary decision back in 1982.

"If we had waited like others until things became clearer, it would have been too late," said the official, who has spent 11 of his 26 years with Volkswagen in China.

"I am half Chinese now," said Woellenstein. "In two years, we will be celebrating our 40th anniversary in China."