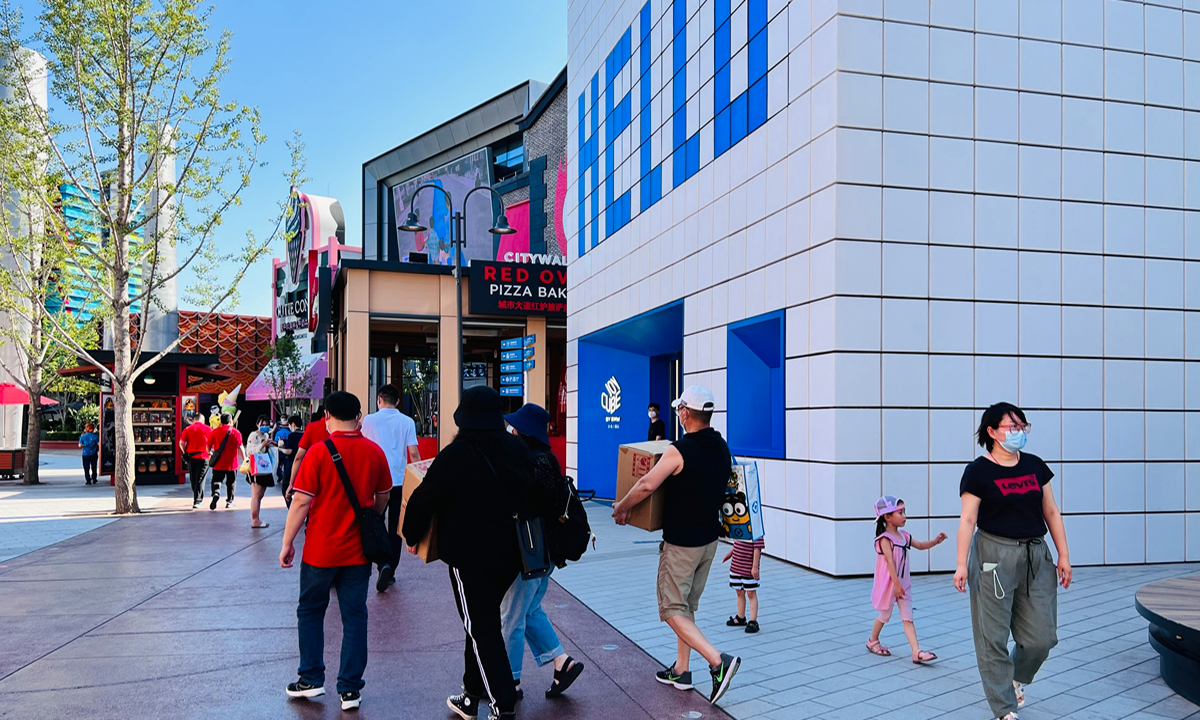 As the Universal CityWalk Beijing resumed operation on Friday, Visitors came to buy souvenir and felt the atmosphere for the opening of Universal Beijing Resort on June 25. Photo: Zhang Yashu/GT

As Beijing gradually brought the latest COVID-19 outbreaks under control, the Beijing Universal Studios' Grand Hotel and Universal CityWalk reopened on Friday, with visitors indulging in a shopping spree for souvenirs and expressing excitement about the long-anticipated reopening of the park on Saturday.

"There have been some people coming in to the shop as most popular items are in stock especially for limited editions which are usually gone pretty fast," a shop staff member told the Global Times on Friday.

Anticipating a huge traffic flow, some visitors came earlier on Friday to purchase their desired souvenirs. A tourist told the Global Times that she came purchase the limited editions for Minions which were out of stock during her last visit, adding that she returned home fully loaded.

Also, some visitors who booked trips on Saturday chose to stay at the hotel on Friday night, as they cannot wait to "embark on the magical journey with their family and friends."

"I just finished my high school entrance exam, and I will live in the Universal Studios Grand Hotel tonight and go in to the park tomorrow. I have been looking forward for this moment for a long time now," a visitor from East China's Shandong Province told the Global Times.

Universal Beijing Resort announced on June 22 via its official Wechat account that it will resume operations in phases based on strict control of passenger flow and strengthening a series of epidemic prevention and control measures. The NUO Resort Hotel will restart operation on July 1.

The online search volume of Universal Beijing Resort instantly increased six times and surged to the first place among the country's scenic spots following the announcement on June 22, while the search volume of the hotels around the resort also rose greatly, with an increase of nearly 40 percent compared to June 21, domestic news outlet yicai.com reported on Wednesday.

The resumption of Universal Studios, an iconic theme park, underscores how the Chinese capital has been cautiously coordinating anti-epidemic efforts with bringing social and economic order back to normalcy. It also ignited hopes that the country's flattering tourism sector could see signs of mild rebound in the summer peak season.

Following the partial opening of Disneyland in early June, the cross-provincial group tourism for Shanghai has been gradually restarting. China's Spring Airlines announced it will organize a six-day tour group trip from Shanghai to Lanzhou, capital of Northwest China's Gansu Province, marking the first cross-provincial group trip from Shanghai. The trip will start on July 1, with an average price of 3,890 yuan ($580) per person.

According to news portal thepaper.cn, in addition to Lanzhou, Shanghai residents from low-risk regions meeting relevant requirements such as with a green heath code are also able to apply to tourism groups to cities like Sanya in South China's Hainan Province in July. But the final realization of the trips will still depend on the airlines and specific epidemic prevention policies on the exact departing date.

Though the tourist volume for densely-populated theme parks has not fully recovered to pre-epidemic level, China's tourism will be expected to gradually rebound in summer thanks to the successful containment of the COVID-19 flare-ups, Jiang Yiyi, deputy head of the School of Leisure Sports and Tourism under the Beijing Sport University, told the Global Times on Friday.

Jiang further noted that domestic scenic spots have accumulated rich experience in balancing the epidemic prevention and promoting local tourism, while China's resurgent tourism also proves its success in effectively controlling the spread of the virus.