Volkswagen unveiled its China electrification plan and new logo on Thursday in Guangzhou, Guangdong province, as it makes major global efforts to herald a new era. 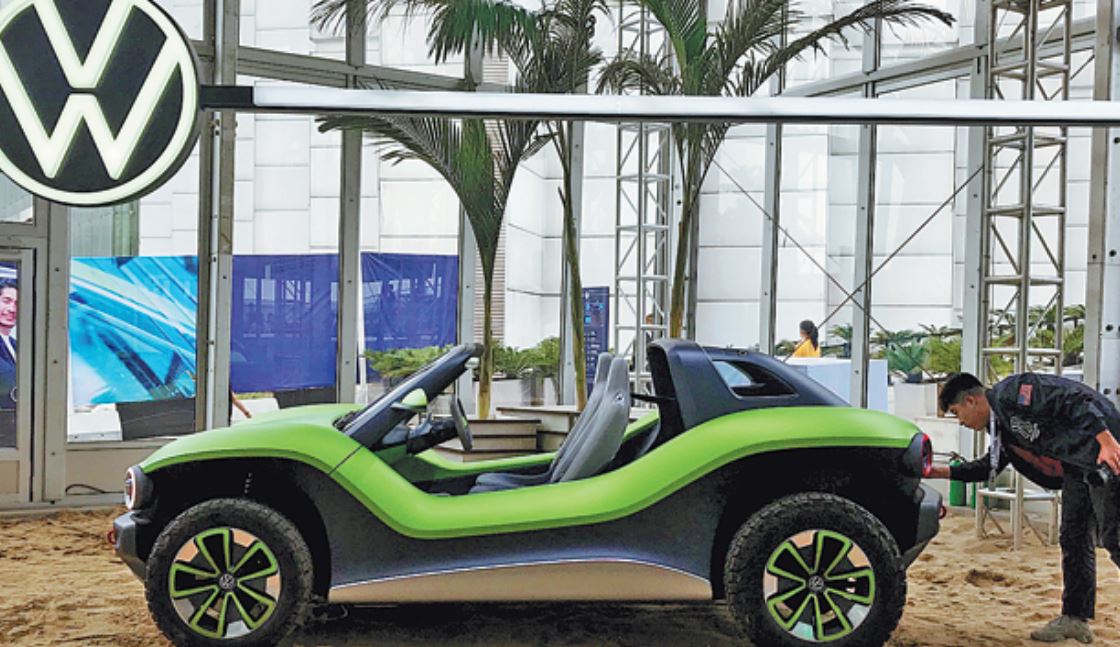 "Over the last two years, we have worked hard at reinventing our brand. New Volkswagen stands for a new generation of cars. They are digital devices on wheels, and fully electric," said Stephan Woellenstein, CEO of Volkswagen Group China.

He said the Volkswagen brand will localize 10 purely electric models of its ID family in China with its two joint ventures FAW-Volkswagen and SAIC Volkswagen by 2023, in addition to 10 new energy versions of models in its current portfolio by 2020.

The ID was Volkswagen's first electric concept, debuting at the Paris auto show in September 2016, one year after the company's emissions scandal broke in the United States.

The company said the production version is the ID 3, shown at this year's Frankfurt auto show in September, which will be produced at SAIC Volkswagen's Anting plant in Shanghai, but it did not give a schedule.

Both SAIC Volkswagen and FAW-Volkswagen are building production lines that feature Volkswagen's MEB platform dedicated to electric vehicles. Together they will have a combined annual production capacity of 600,000 vehicles.

Woellenstein said local production of the first MEB-based vehicle, the ID Chuxian SUV, which in Chinese means "first encounter", will start in a year.

That is roughly when the Chinese government will fully withdraw the subsidies that have been available for Chinese-branded new energy vehicles since 2009 and helped stimulate the growth of the sector in the world's largest car market.

Volkswagen wants to become the dominant player in China's new energy sector as it has in its gasoline vehicle segment.

Statistics show that Volkswagen sold 2.24 million vehicles in the first nine months this year in the country, 12.19 percent of its total global sales.

In a speech earlier this year, Volkswagen AG CEO Herbert Diess, who is also president of Volkswagen Group China, said the group will produce some 70 electric models by 2028, with total deliveries reaching 22 million, and more than half of them will be produced in China.

The goal is part of Volkswagen's commitment to the Paris climate agreement, said Woellenstein.

"Volkswagen will be net carbon neutral by 2050 - at the latest - around the world and in China. By 2025, our factories will produce 30 percent less waste, and use 30 percent less energy and water per vehicle," he said.

"New Volkswagen stands for a firm commitment: contributing to a better world. We are on the way to emission-free mobility for all."

Volkswagen will also introduce its new logo across more than 2,200 dealerships in the country.

The VW letters remain enclosed in a circle like it always has. But the new one, which made its global debut in September in Frankfurt, is much simpler - just the essential form, flat and two-dimensional.

It will allow more flexible use and will be outstandingly recognizable in digital media, said Volkswagen.

Volkswagen's chief designer Klaus Bischoff said, "We have created an authentic communications platform for the emotional presentation of e-mobility. We are showing the future under the motto of 'digital first' and 'no filter'."

The brand's first digitalized dealership, which belongs to FAW-Volkswagen, was unveiled in Guangzhou on Friday. The dealership is intended to offer potential customers and fans a better digitalized experience and an easier way to learn information about models.

"We have done many forward-looking studies and we need to change based on market trends: customers are getting younger and digital devices are becoming part of life," said Dong Xiuhui, vice-president of FAW-Volkswagen.

The joint venture also launched a smartphone app on the same day. It will serve as a one-stop service platform where customers can do a range of things from getting information to booking maintenance.

The app also enables customers and dealers as well as the carmaker to have more online exchanges.

Dong said digitalization is an inevitable trend, and digital channels are of paramount importance in China to reach new customers and keep in touch with existing owners.

"The brick-and-mortar dealerships and the app will have far-reaching impact and serve as a milestone in our transformation from a carmaker and mobility provider to a precise marketing service provider," said Dong, who added that more dealerships with digitalized features will emerge in 2020.