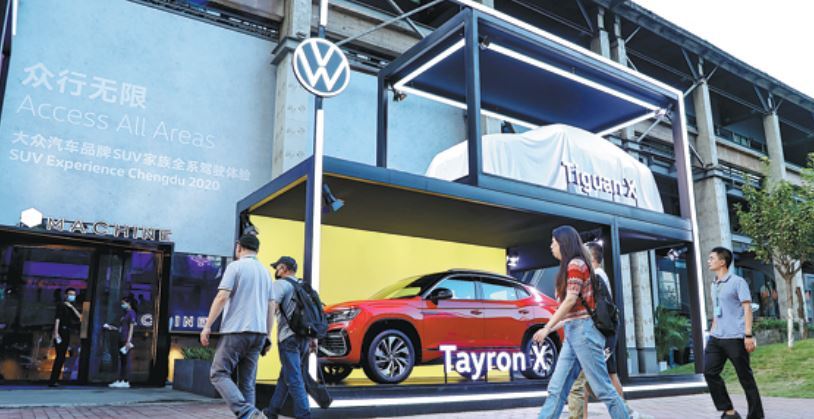 Visitors walk past Volkswagen SUVs outside a mall in Chengdu, Sichuan province, on Sept 6. [Photo provided to China Daily]

German carmaker Volkswagen will continue to grow its SUV portfolio in China, offering at least 17 different models by the end of 2022, a senior executive said.

Volkswagen Group China CEO Stephan Woellenstein said the namesake brand has 10 SUV models in the market, with another three gasoline models and four pure electric models to come in the next two years.

Woellenstein said the move will make China the market where Volkswagen offers the largest number of SUVs. He made the remarks last week in Chengdu, capital of Sichuan province, where the German carmaker offered an opportunity for journalists to test drive all of its SUVs, both imported and those made in China.

Volkswagen had three SUVs in China in early 2018. The successive launches of SUVs by its two Chinese joint ventures have made Volkswagen the most popular choice among SUV buyers since 2019.

Jia Mingdi, president of SAIC Volkswagen's sales operations, said the joint venture has sold 2.8 million SUVs since the first model, the Tiguan, was launched 10 years ago.

Currently, SUVs account for around 30 percent of Volkswagen's vehicle sales in China.

The current rate of SUVs at Volkswagen's sales is lower than the average figure of 46.5 percent in the first eight months this year in China's passenger vehicle market, according to statistics from the China Association of Automobile Manufacturers.

Woellenstein said SUVs are also becoming more popular in other parts of the world.

"It is easier to get in and out than sedans, and the high seating positions make people feel more confident," he said. The carmaker has decided to start its massive electrification campaign with SUVs as well.

The first one, the ID.4 SUV, will start production in the fourth quarter this year and will be launched around Spring Festival.

Woellenstein said these new models will cover basically all segments of the SUV market and also mark the end of Volkswagen's SUV campaign that began two and a half years ago. He said the upcoming facelifts and later generations will meet current customer demand in the Chinese market. In 2019, Volkswagen sold 812,500 SUVs to Chinese customers, up 81.6 percent year-on-year.