VW, Ford team up on pickups, explore deal on electrics

Volkswagen and Ford say they're forming a global alliance in which they will develop commercial vans and medium-sized pickups together while exploring broader cooperation on future battery-powered and autonomous vehicles. 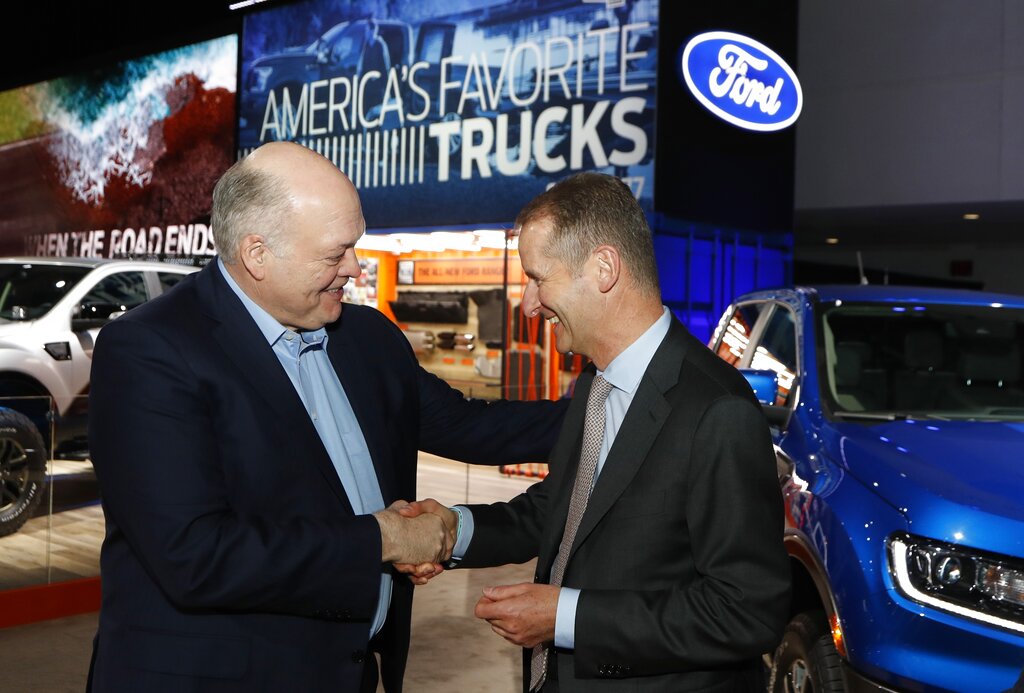 Volkswagen CEO Herbert Diess and Ford CEO Jim Hackett said in a statement Tuesday that the first jointly developed vehicles could hit the market as early as 2022 and that the linkup would offer efficiencies that would mean stronger profits starting 2023.

Ford would make the medium-sized pickups, one of its strengths, as well as larger vans. Volkswagen would develop and build a city van. Cooperation on development lets carmakers spread their costs over more vehicles, lowering their average costs.

The two companies also signed a memorandum of understanding to look into cooperation on electric and autonomous cars and were willing to consider additional projects, but without taking shares in each other.

Carmakers are facing the need to invest billions in new technologies. They are under pressure from governments in key markets such as the European Union and China to come up with electric vehicles so they can meet tougher pollution limits. And they are racing with tech companies such as Waymo and Uber to develop autonomous vehicles and to find ways to offer temporary use of an auto as a service through smartphone apps.

At the same time, a slowing global economy is putting pressure on profits and underlining the need to control costs. Ford last week announced a shakeup of its European operations that will mean dropping less profitable vehicle lines.

Volkswagen CEO Diess said that while Volkswagen is generally highly competitive it lacks volume in light trucks and midsize pickups. "Sharing platforms and parts with Ford provides very competitive scale effects in this segment - with the effect that jointly we will become number 1 in this area," he said in a statement.

Hackett said that "over time, this alliance will help both companies create value and meet the needs of our customers and society."

He said the alliance "will not only drive significant efficiencies and help both companies improve their fitness, but also gives us the opportunity to collaborate on shaping the next era of mobility."