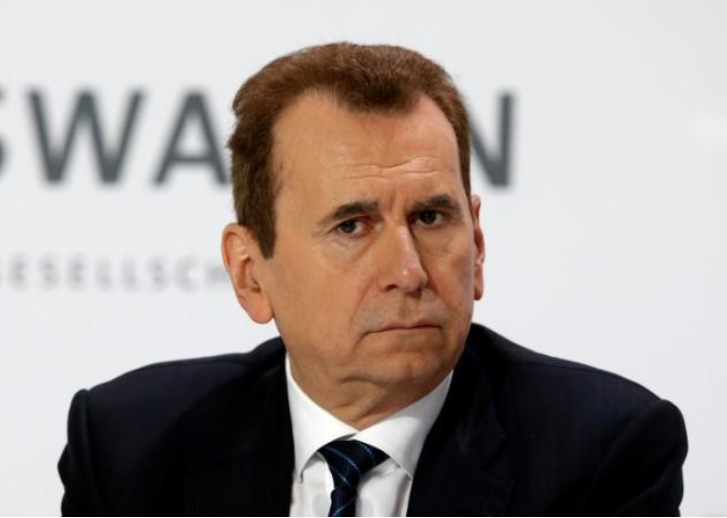 Karlheinz Blessing, member of the Board of Management of Volkswagen AG with responsibility for 'Human Resources and Organization' attends Volkswagen AG annual news conference in Wolfsburg, Germany, April 28, 2016 (Photo: Reuters)

Volkswagen (VOWG_p.DE) will give workers a management board seat to try to secure agreement for a far-reaching reform of the company under a new chief executive, sources familiar with the matter said on Wednesday.

Europe’s biggest automaker has, particularly since its 2015 emissions scandal, been looking to become more focused and efficient by, for example, spinning off its trucks business, creating a premium cars unit or selling motorbike brand Ducati.

But CEO Matthias Mueller’s attempts at reform have often been thwarted by turf wars among the German company’s powerful stakeholders, and opposition from its labor leaders.

Two sources familiar with the matter said on Tuesday that Volkswagen’s supervisory board was poised to replace Mueller, a 64-year-old company veteran, with Herbert Diess, the 59-year-old head of its core VW brand who joined from BMW (BMWG.DE) in 2015 with a reputation for driving change.

On Wednesday, four sources close to the company told Reuters the supervisory board would seek to bring works council executive Gunnar Kilian onto the company’s management board to try to secure backing for Diess and his plans.

The supervisory board is due to meet on Friday, where Diess will outline a new leadership structure, two sources said.

Volkswagen could look to split into four sections - a mass-market carmaker including its VW, Seat and Skoda brands; a premium business consisting of Bentley and Audi (NSUG.DE); a sportscar group including Porsche, Bugatti and Lamborghini; and a commercial vehicle and trucks arm, the sources said.

Such an overhaul would be part of a wider auto industry trend towards spin-offs as companies look for ways to become nimbler and more efficient to cope with rapid changes such as the rise of electric vehicles and autonomous driving.

German rival Daimler (DAIGn.DE), for example, is looking at splitting parts of its business into separate entities, while autos supplier Continental (CONG.DE) is weighing up a revamp that could entail listing or spinning off divisions.

Friday’s supervisory board meeting is expected to start preparations for a stock market listing of the trucks and bus division, sources have said.

A separately listed trucks and bus business could have a market value of up to 30 billion euros ($37 billion), Evercore ISI analysts have said. That compares with Volkswagen’s current market capitalization of around 85 billion euros.

“Diess will hold both positions, CEO of the company and the VW brand,” one of the sources said, speaking on conditional of anonymity due to the sensitivity of the subject.

That would give him a sweeping mandate to review broader changes to the way the group is managed.

However Ingo Speich, a fund manager at Union Investment which holds about 0.6 percent of Volkswagen preference shares, worried that running a group with around 640,000 employees at over 120 plants worldwide could prove tough for Diess, who has a reputation for micro-management.

“The range of tasks at group level with its many brands, legal risks and political influence makes the new assignment incomparably more complex,” he said.

Speich also signaled there was no guarantee that reforms would become easier to push through.

“The unions will try to firm up their power with the new leadership structure,” he added.

Volkswagen shares, which closed up 4.5 percent on Tuesday following reports of Diess’s likely appointment, were up 0.8 percent at 173.02 euros as of 1545 GMT.