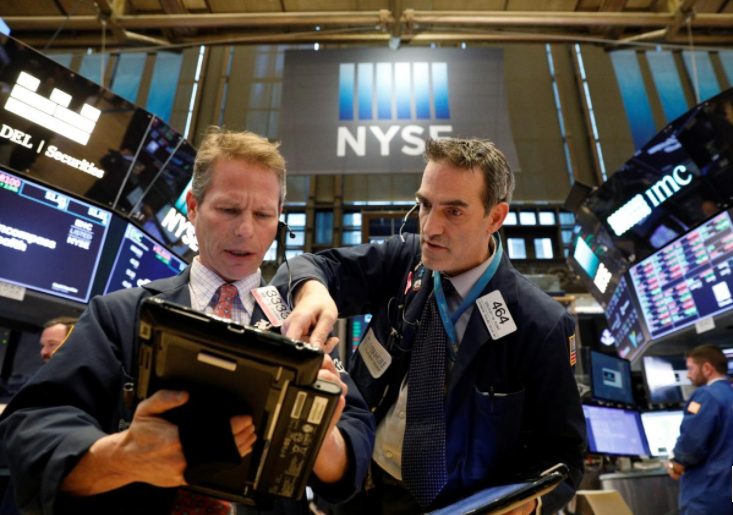 Traders work on the floor of the New York Stock Exchange, (NYSE) in New York, US, February 6, 2018. Photo: Reuters/Brendan McDermid

Gains in technology and industrial shares helped US stocks rebound from a two-day fall on Thursday as investors shrugged off the prospects of more interest rate hikes this year.

Minutes of the Federal Reserve’s latest meeting showed on Wednesday that the policymakers were more confident in the need to keep raising rates, with most believing inflation would perk up.

However, comments from St Louis Fed President James Bullard earlier in the day appeared to have eased some of those concerns and the benchmark 10-year US Treasury yields US10YT=RR retreated from the more than four-year highs they hit on Wednesday.

Bullard told CNBC on Thursday that central bankers need to be careful not to increase interest rates too quickly this year because that could slow the economy too much.

Wall Street’s fear gauge, the CBOE Volatility index .VIX, was at 18.58. The index had jumped above 21 points after the release of minutes.

“Yesterday was overdone. Clearly we have a major market reversal and today investors are more comfortable with the likelihood of three rate hikes and not four,” said John Lynch, chief investment strategist at LPL Financial in Charlotte, North Carolina.

Despite Fed’s hawkish views, bets on the US short-term interest rate futures continued to reflect expectations of three rate hikes this year, based on a Reuters analysis.

Traders also gave a 94 percent chance that the first hike would come in March.

“In spite of what we experienced with a return to volatility a couple of weeks ago, we can still see firming economic and profit growth and that is something investors will need to maintain their focus on,” Lynch said.

United Technologies rose 3.2 percent after its chief executive said the company was exploring a breakup of its business portfolio.

All the 11 major S&P sectors were higher, led by a more than 2 percent rise in the energy index .SPNY.

Chesapeake Energy was the top gainer on the index, jumping 19 percent, after the company reported upbeat quarterly profit.