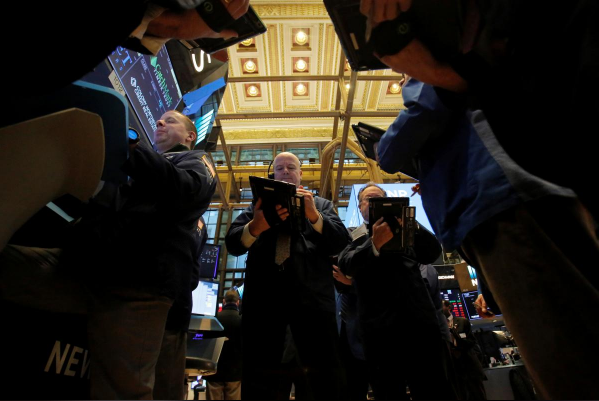 The top gainer on the S&P 500 was the energy index .SPNY, which rose 1.2 percent, helped by advances in shares of Exxon  and Schlumberger .

“It seems like fundamental backdrop is positive and that is offsetting the turmoil at the White House,” Jack Ablin, chief investment officer, Cresset Wealth Advisors, Chicago.

The gains come at the end of a rocky week, dominated by concerns of a trade war with China and political turmoil, which began with the ouster of Secretary of State Rex Tillerson.

“Anything that leans towards protectionism tends to be negative headwind to the markets,” said Art Hogan, chief market strategist at B. Riley FBR in New York. “As we hear more rhetoric, the more concerned we get.”

The three main indexes are still on track to end the week lower, with the S&P 500 .SPX posting its longest streak of losses in 2018.

Retailers Walmart and Home Depot gained more than 1 percent after the University of Michigan’s preliminary reading of consumer sentiment index rose more-than-expected to 102.0.

Adobe Systems was up 3 percent after the Photoshop maker topped analysts’ profit and revenue estimates for the seventh straight quarter.

Micron Technology rose 2.2 percent after Baird analysts raised price target on the stock by $40 to $100 and Western Digital WDC.N gained 3.5 percent after an upgrade to “outperform”.

Volatility is expected to increase on Friday as investors unwind interests in futures and options contracts prior to their expiration.

Advancing issues outnumbered decliners on the NYSE for a 2.24-to-1 ratio and for a 1.63-to-1 ratio on the Nasdaq.