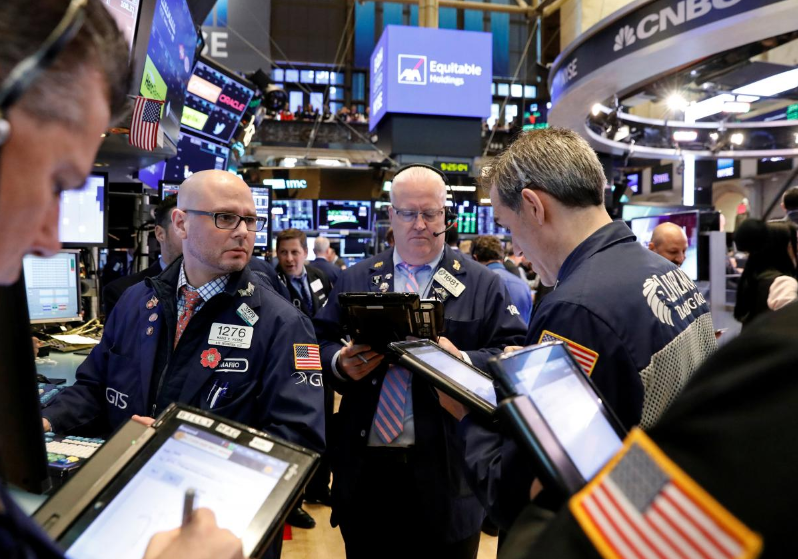 US stocks rallied on Monday after the United States and China put their trade differences “on hold” to work on a wider agreement, while sentiment was also boosted by the nearly $28 billion worth of merger deals.

The truce sparked a broad rally, with the Dow Jones Industrial Average .DJI touching a session high of more than two months and the small-cap Russell 2000 hitting a record high for the fourth straight session.

US Treasury Secretary Steven Mnuchin said on Sunday the United States and China had agreed to drop their tariff threats, while China on Monday praised a significant dialing back of tensions.

“This is an indication of what we’ll see near term, because we are through earnings, relatively light on macro data, and with geopolitics, it seems like some of the emotion has been reduced between now and the Korean summit.”

The S&P industrial sector .SPLRCI advanced 0.8 percent. Boeing, which sells about a fourth of its commercial aircraft to Chinese customers, jumped 3.4 percent, the biggest percentage gainer on the Dow and lifting the blue-chip index higher.

General Electric advanced 2.6 percent on an $11.1 billion deal to merge its transportation business with rail equipment maker Wabtec, which jumped about 4.2 percent.

Still, not all US business leaders were happy with the trade war truce, with some cautioning that Washington would find it tough to rebuild momentum to address what they see as troubling Chinese policies.

AK Steel and US Steel both fell more than 4 percent following a delay in implementing tariffs on Chinese imports.

Micron rose 3.9 percent, the most on the S&P, after the chipmaker lifted its current-quarter forecast.

The easing of the trade dispute also boosted the chipmakers, whose major clients include Chinese firms, with the Philadelphia chip index .SOX gaining 0.9 percent. The technology sector .SPLRCT rose 0.8 percent.

Regional lender MB Financial jumped 13.3 percent after agreeing to be bought for $4.87 billion by Fifth Third Bancorp, which fell 7.8 percent, the biggest percentage decliner on the S&P.

On the downside, Celgene fell 3.6 percent and hit a four-year low, dragging on the Nasdaq Biotech index .NBI 0.8 percent lower.