Mnuchin on Sunday held a phone call with the six biggest US banks, reporting on Twitter that the CEOs have "ample liquidity" available. But market watchers said Mnuchin's efforts raised fresh doubts about the US economic outlook, contributing to Monday's retreat in a holiday-shortened session. 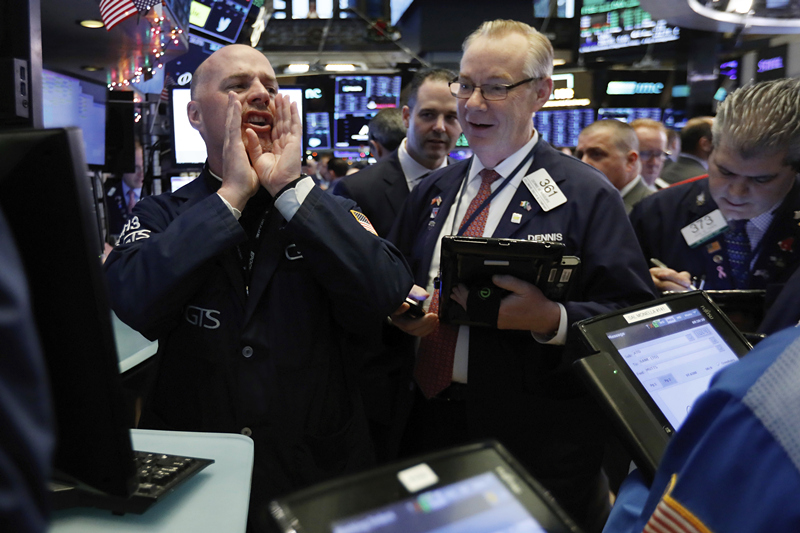 The broad-based S&P 500 finished down 2.7 percent, a bitter finale to the lead-up to Tuesday's Christmas holiday, when markets will be closed. Light trading volume likely exacerbated the losses.

CNBC called the session the "worst Christmas Eve error" in terms of losses.

"There's simply no buyers out there," said Manulife AM senior portfolio manager Nate Thooft. "Nobody is really willing to step in and take a stand that this is the bottom."

Earlier, Paris and London both finished lower, while Frankfurt was closed.

Oil prices also continued to pull back on worries about slowing growth. US benchmark West Texas Intermediate dropped 6.7 percent to $42.53 a barrel.

Monday's sell-off in New York was a continuation of the negative momentum from last week when both the Dow and Nasdaq suffered their biggest weekly losses since the financial crisis in late 2008.

But there were more surprising headlines over the weekend, normally a sleepy news period near the peak time of the festive season.

Mnuchin on Saturday released a statement on Twitter quoting US President Donald Trump as denying any plans to fire Fed Chairman Jay Powell following media reports that Trump had privately asked cabinet members if he has the authority to dismiss the Fed chief.

On Sunday, Mnuchin on Twitter chronicled the phone call with heads of Bank of America, Citigroup, Goldman Sachs, JPMorgan Chase, Morgan Stanley and Wells Fargo, who confirmed that they face no liquidity issues and "markets continue to function properly."

Analysts expressed both surprise and alarm at Mnuchin's Sunday statement, saying it might do the opposite of calming current jitters.

"One of the risks... of making this kind of statement is that it could make market participants concerned that there was in fact a deeper issue at hand, if they were not already concerned in the first place," noted currency analyst Fritz Louw at financial group MUFG.

"It simply adds to the uncertainty that is already roiling markets."

Some analysts were also unnerved the reports over a possible Powell firing.

"If Trump tries to remove Powell, it could throw the financial markets into deep chaos that makes the current market turmoil look tame," said a note from Oxford Economics.

Trump on Monday did not address the potential Powell dismissal, but amplified his criticism of the central bank, in his first comment on the Fed since last week's interest rate hike.

"The only problem our economy has is the Fed. They don't have a feel for the Market, they don't understand necessary Trade Wars or Strong Dollars or even Democrat Shutdowns over Borders. The Fed is like a powerful golfer who can’t score because he has no touch - he can't putt!" Trump tweeted.

Thooft said he was skeptical Trump would actually fire Powell, viewing the latest comment as a continuation of the president's criticism of the agency.

"This is an administration who has been taking credit for two years on market highs and so now he's looking for someone to potentially blame now that the market has gone down 20 percent," Thooft said.