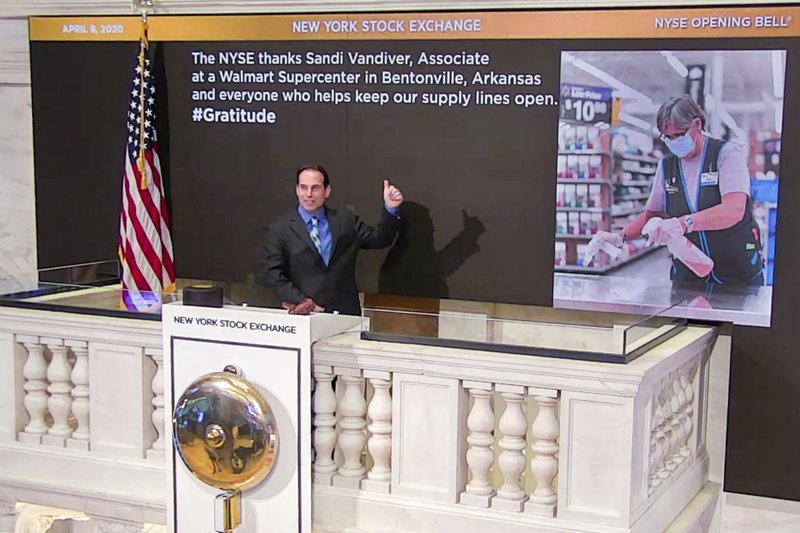 Stocks are climbing again on Wall Street Wednesday. Maybe this time it will last.

The S&P 500 was up about 2% in afternoon trading as investors focused on the optimistic side of data about the coronavirus outbreak’s trajectory. Trading remained unsettled around the world Wednesday, though, with European and Asian stock markets mixed. A day before, an even bigger gain for the S&P 500 suddenly vanished in the afternoon.

Markets have been incredibly volatile in recent weeks as investors blindly guess how badly the coronavirus outbreak will hurt corporate profits amid suffocating uncertainty. The economic damage is widespread, and France’s central bank said its economy entered a recession with a 6% drop in the first three months of the year.

Countering that has been unprecedented aid from governments and central banks, with discussions ongoing for even more. Some investors are also pointing to nascent signs that infections and deaths may soon be peaking or plateauing in several hotspots around the world. Dr. Anthony Fauci, the top U.S. infectious diseases expert, said Wednesday that the White House is working on plans to eventually reopen the country amid “glimmers of hope,” and President Donald Trump said it “will be sooner rather than later.”

Caught between those forces are investors, who have sent the S&P 500 down about 20% from its record set in February. Earlier, it had fallen as much as a third from that mark, reflecting investors’ expectations for a steep, sudden recession and drops in corporate profits. Where stocks go from here depends on how long it takes for the economy to reopen and get closer to what used to be normal.

“It’s positive that people are talking about reopening the economy,” said Jeff Buchbinder, equity strategist for LPL Financial. “The White House has been talking about that. The more we can focus on what the economy will look like several months out, the better it will be for markets.”

Stocks that have been beaten down the most since the sell-off began in February were leading the market, including energy companies, retailers, travel-related companies. That was also the early trend of Tuesday, before the gains vanished.

Shares of insurers and other stocks also shot higher after Bernie Sanders suspended his presidential campaign. Investors had been wary of Sanders’ proposal of “Medicare For All” and other plans that could have restricted profits.

UnitedHealth rose 3.7% after being down slightly in the morning, and Anthem jumped 5.8%.

Treasury yields, which signaled worries about the economic damage coming from the coronavirus outbreak earlier than the stock market, were relatively steady. The yield on the 10-year Treasury ticked up to 0.74% from 0.73% late Tuesday.

Uncertainty, though, is still the dominant force in markets. The World Trade Organization said global trade could fall anywhere from 13% to 32% this year, and the drop could be worse than during the 2008-09 financial crisis. The wide range in the forecast was due to how unpredictable the pandemic is, which has caused businesses to shut down around the world in hopes of slowing the spread of the virus.

Companies are also preparing to report their financial results for the first three months of the year in upcoming weeks. The numbers are likely to be bleak, but investors don’t know how long that will last. McDonald’s on Wednesday pulled its forecast for sales, profit margins and and other measures for 2020 and the long term, citing the uncertainty created by the pandemic.

In Europe, stocks dipped after finance ministers clashed over a proposal to collectively combat the health crisis. Countries that have been hardest hit there by COVID-19 are also among those that can least afford to pay for it, such as Italy and Spain. But the outbreak is dragging on economies across the continent. German economists predict its economy will shrink 4.2% this year.

Trading in Asia was more mixed.

Benchmark U.S. crude oil rose 70 cents, or 3%, to $24.35 a barrel Wednesday, recovering some of its 9.4% slide from the prior day. Oil prices have been even more volatile than stocks recently as Russia and Saudi Arabia argue about whether to cut production in the face of withering demand. Oil producers are set to meet on Thursday, and an announcement for production cuts to prop up the price of crude is possible.

More than 1.4 million cases of COVID-19 have been confirmed around the world, with more than 399,000 of them in the United States.

For most people the virus causes mild to moderate symptoms such as fever and cough. But for some older adults and those with existing health problems, it can cause pneumonia and death. More than 83,000 people have died, while over 308,000 have recovered, according to a tally by Johns Hopkins University.