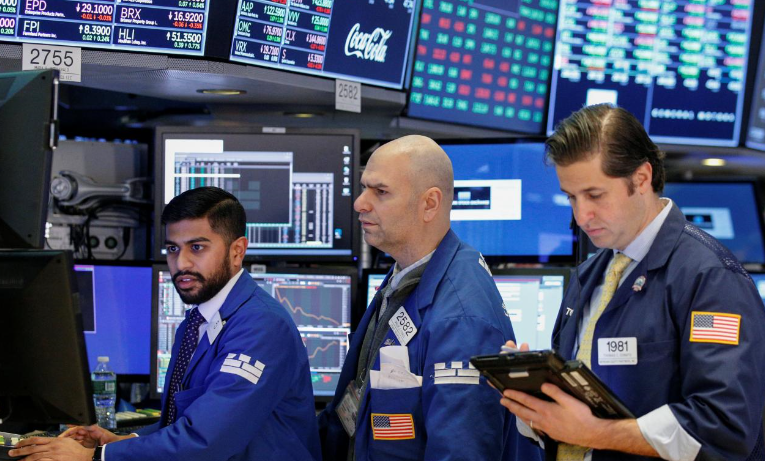 Wall Street climbed on Friday as both the S&P 500 and Dow hit records on the latest round of strong earnings reports, including results from Intel and AbbVie, as well as continued weakness in the dollar.

The advance put the three main indexes on pace for their best four-week run since 2016.

Intel’s (INTC.O) shares surged as high as $49.95, the highest level since October 2000, and were last up 9.81 percent after results indicated that the chipmaker’s shift to higher-margin data-center business was working.

AbbVie’s (ABBV.N) shares jumped 12.68 percent to a record after the drugmaker significantly boosted its 2018 earnings forecast with help from U.S. tax reform and said it hopes to accelerate dividend growth and share buybacks.

“Earnings are driving the bus right now on the backdrop of still-strong economic growth prospects. You have the prospect of getting more economic growth because of tax reform,” said Brent Schutte, chief investment strategist at Northwestern Mutual Wealth Management in Milwaukee.

Fourth-quarter earnings growth for the S&P 500 is now estimated at 13.2 percent, according to Thomson Reuters data, up from 12 percent at the start of the year. Of the 133 companies in the index that have reported through Friday, 79.7 percent have topped expectations.

The earnings enabled investors to shrug off a reading on economic growth that came in below expectations.

Gross domestic product increased at a 2.6 percent annual rate in the fourth quarter, the Commerce Department said in its advance GDP report, below the 3-percent forecast, as the strongest pace of consumer spending in three years resulted in a surge in imports.

“Even with today’s supposedly disappointing GDP, from an economic perspective ... you have manufacturing and the consumer doing well at the same time and the globe is doing better, so that’s a path for future GDP gains, which has always provided a fertile backdrop for earnings gains,” said Schutte.

Weakness in the dollar, which is supportive for large multinational companies, continued with the greenback down 0.59 percent against a basket of major currencies.

The dollar was on track for its worst week since May after comments from senior U.S. officials this week backing a weak currency.

Buoyed by AbbVie, the S&P healthcare index .SPXHC gained 1.62 percent, the best performer among the 11 major S&P sectors and on track for its best day since November 2016.

Also lifting the index were gains in Pfizer (PFE.N), up 4.14 percent after a European regulator recommended granting marketing approval to a diabetes drug developed by the company and Merck (MRK.N), up 0.82 percent.

Starbucks (SBUX.O) dropped 4.99 percent after it warned 2018 global cafe sales growth would be at the low end of its forecast.

Declining issues outnumbered advancing ones on the NYSE by a 1.03-to-1 ratio; on Nasdaq, a 1.18-to-1 ratio favored advancers.