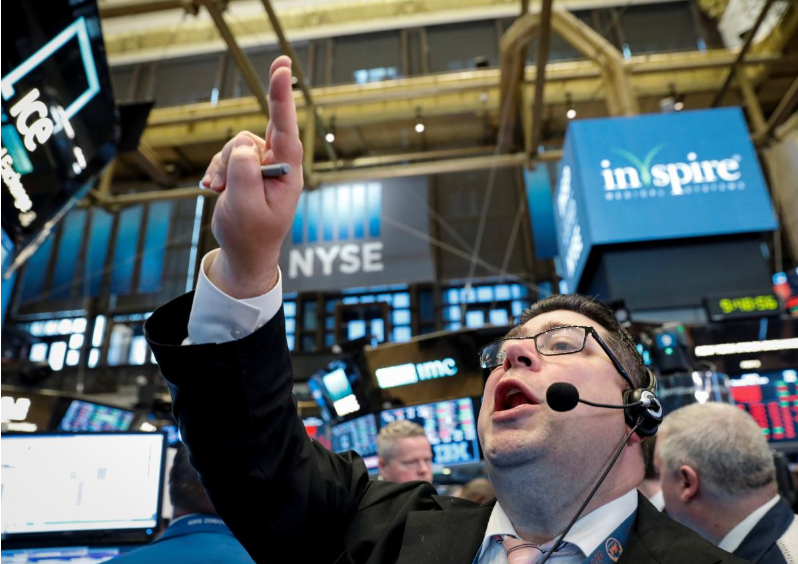 Trader Michael Capolino shouts out a bid on the floor of the New York Stock Exchange (NYSE) in New York, US, May 3, 2018 (Photo: Reuters)

Wall Street rose on Monday as energy stocks were boosted by US crude hitting $70 per barrel for the first time since late 2014, while technology shares were lifted by Apple’s sixth day of gains.

The S&P energy index surged 2 percent, the biggest gainer among the 11 major S&P sectors, as oil prices were supported by the latest troubles for Venezuelan oil company PDVSA and a looming decision on whether the United States will re-impose sanctions on Iran. [O/R]

Apple was up 0.9 percent, extending its gains since it reported results last week and after Berkshire Hathaway on Friday disclosed that it had boosted its stake in the iPhone maker. Warren Buffett told CNBC on Monday, “I’d love to own 100 percent of it.”

“But there’s no question that it’s going to become part of story in the fear that people have for companies that have input prices to be concerned with and also for inflation.”

Worries over inflation and interest rates, along with tariff and geopolitical tensions, have overshadowed a solid earnings season, which is on track to record its best quarter in seven years.

Nearly 80 percent of the 417 S&P 500 companies that have reported so far have topped profit estimates, according to Thomson Reuters I/B/E/S. That is well above the long-term average of 64 percent and the average of 75 percent over the past four quarters.

“Given that there was a bit of reprieve from some of the concerns about wage inflation, certainly the CPI and PPI will garner the market’s attention mid week,” said Bill Northey, chief investment officer at US Bank Wealth Management.

Eight of the 11 major S&P sectors were higher, with the technology index’s 0.8 percent gain providing the biggest boost to the S&P 500 index.

AthenaHealth jumped 15.6 percent after hedge fund Elliott Management proposed an all-cash offer that would value the healthcare IT company at about $6.5 billion.

Sectors that are sensitive to rise in US bond yields such as utilities, consumer staples and telecoms were all down between 0.37 percent and 0.7 percent.