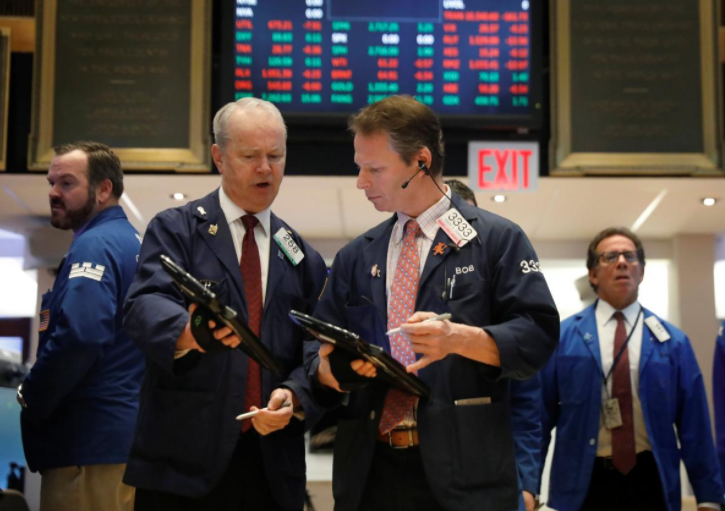 Traders work on the floor of the New York Stock Exchange shortly after the opening bell in New York, US, February 21, 2018. Photo: Reuters/Lucas Jackson

US stocks closed lower on Wednesday in a rocky session after the release of the minutes from the Federal Reserve’s January meeting pushed yields on the benchmark 10-year US Treasury note to a four-year high.

After the Fed left interest rates unchanged in January, minutes showed the US central bank’s rate-setting committee grew more confident in the need to keep raising rates, with most believing inflation would perk up amid an improving economic landscape.

Stocks initially reacted positively, with each of the major Wall St indexes touching session highs. Stocks began to pare gains, however, as bond yields US10YT=RR climbed to a four-year high of 2.957 percent on the likelihood of further rate increases this year.

“The Fed meeting minutes indicated Fed members weren’t too worried about inflation, so that was music to the market’s ears,” said Michael Arone, Chief Investment Strategist at State Street Global Advisors in Boston.

“Since then the market is recognizing the meeting happened at the end of January and since then we have had the strong jobs report, the average hourly earnings pickup, the CPI figures and they also said it is going to be appropriate to raise rates.”

Expectations for a quarter-point hike at the Fed’s next meeting in March are currently 93.5 percent, according to Thomson Reuters data. The Fed has forecast three rate hikes in 2018.

rebounded in recent sessions as yields on the 10-year US Treasury note had stabilized around the 2.9 percent mark. Even with the recent rally, the index has been unable to convincingly hold above its 50-day moving average, seen as a key support level.

“It is unusual for it to make that V-shaped recovery that it did and keep going,” said Jeff Zipper, managing director at the US Bank Private Client Reserve in Palm Beach, Florida.

“We keep hearing about a possible re-test of that bottom but we will see how it holds up.”

The prospect of higher rates and an unexpected fall in January US existing home sales dented the real estate .SPLRCR sector, off 1.81 percent. Other sectors seen as bond proxies due to their high dividend yields, utilities .SPLRCU and telecoms .SPLRCL, also dropped more than 1 percent.

Declining issues outnumbered advancing ones on the NYSE by a 1.17-to-1 ratio; on Nasdaq, a 1.24-to-1 ratio favored advancers.

Volume on US exchanges was 6.96 billion shares, compared to the 8.49 billion average over the last 20 trading days.