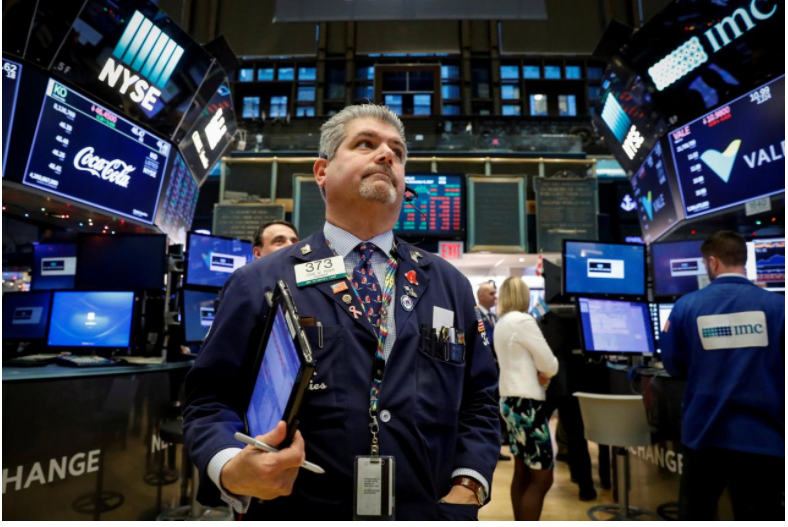 Traders work on the floor of the New York Stock Exchange (NYSE) in New York, US, December 6, 2017. Photo: REUTERS/Brendan McDermid

The S&P 500 and the Dow were lower on Thursday as investors worried about potential roadblocks to Republicans’ tax overhaul, offseting their optimism over strong retail sales data.

Lawmakers such as Senators Marco Rubio and Mike Lee said on Thursday that they would not vote on the bill without changes to child tax credits. Congressional Republicans had reached a deal on final tax legislation on Wednesday.

Equity investors worry that stocks could tumble if the bill, which includes slashing corporate taxes, fails.

“The fear they can’t get corporate tax cuts across the finish line might be causing the market to turn down, despite the strong retail sales and other good economic data,” said Kim Forrest, senior equity research analyst at Fort Pitt Capital Group in Pittsburgh.

“The last catalyst left for this year is tax reform. Any market move is based on the shifting probabilities of its passage,” said Michael Antonelli, managing director, institutional sales trading at Robert W. Baird in Milwaukee, citing uncertainty over Rubio’s demands.

Healthcare stocks were the biggest decliners, with a 1.1 percent drop. The sector erased almost all its gains from the last three days in Thursday’s move.

By late afternoon, all the S&P sectors except tech and consumer discretionary were in the red. The consumer sector was up 0.28 percent after strong November data and merger news.

Fox shares were up 5.8 percent and Disney was up 3.5 percent, also boosting the consumer discretionary sector by 0.5 percent. Other media stocks Netflix and Comcast were also higher.

US retail sales increased more than expected in November as the holiday shopping season got off to a brisk start, pointing to sustained strength in the economy that could pave the way for further Federal Reserve interest rate hikes next year.

The Fed on Wednesday raised interest rate by a quarter-percentage-point for the third time in 2017 and raised its 2018 economic growth forecast to 2.5 percent from 2.1 percent.

Data that showed a better-than-expected increase in US retail sales in November also bolstered the growth outlook, while the number of Americans filing for unemployment benefits fell to near a 44-1/2-year low last week.

Investors were also digesting the US Federal Communications Commission’s vote on Thursday to repeal landmark 2015 rules aimed at ensuring a free and open internet, setting up a court fight over a move that could recast the digital landscape.

Declining issues outnumbered advancing ones on the NYSE by a 2.03-to-1 ratio; on Nasdaq, a 2.17-to-1 ratio favored decliners.