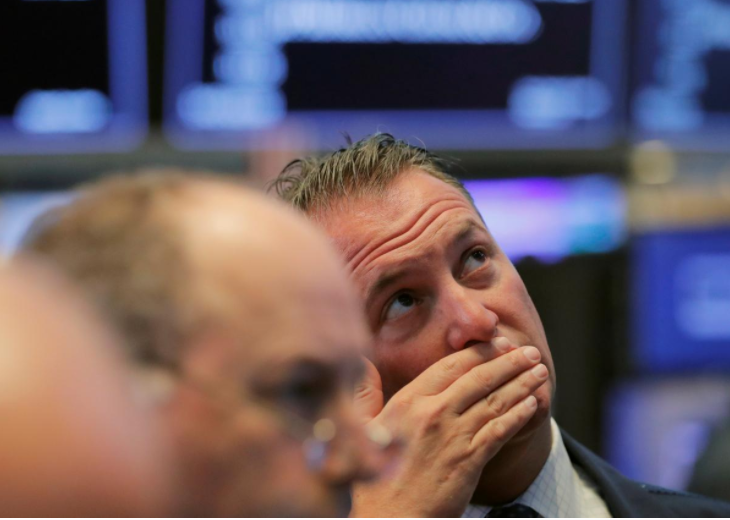 Traders work on the floor of the New York Stock Exchange shortly after the opening bell in New York, US, April 12, 2018. (Photo: Reuters)

Technology and financial stocks led a rally on Wall Street on Thursday as President Donald Trump toned down his views on attacking Syria and investors focused on what could be the strongest earnings reporting season in seven years.

Trump said a possible attack on Syria may not be imminent, easing fears of confrontation with Russia.

That lifted US Treasury yields, leading to a nearly 2 percent increase in the financial sector .SPSY.

“In the past few days, some of the worries that market was fretting about – trade wars, Facebook, missile attacks – all of those have things have been walked back a little bit,” said Michael Antonelli, managing director, institutional sales trading at Robert W. Baird in Milwaukee.

BlackRock gained 2.8 percent after the asset manager’s profit rose more than expected. Reports from JPMorgan, Citigroup and Wells Fargo will kick off the earnings season in earnest on Friday.

Analysts expect quarterly profit for S&P 500 companies to rise 18.5 percent from a year ago, the biggest gain in seven years, according to Thomson Reuters I/B/E/S.

“The market is finally starting to build on itself, earnings are coming. This is the real risk-on type of rally,” Antonelli said.

Treasury yields and investor sentiment were also boosted by an upbeat US initial jobless claims report that pointed to sustained labor market strength.

Eight S&P sectors were higher, with the technology sector’s .SPLRCT 1.6 percent gain giving the biggest boost to the market.

One notable laggard among techs was Facebook. Its shares fell 1 percent following a 5.3 percent gain in the past two days when Chief Executive Mark Zuckerberg testified before Congress on the data privacy scandal.

Advancing issues outnumbered decliners on the NYSE for a 1.50-to-1 ratio and on the Nasdaq, for a 2.17-to-1 ratio.