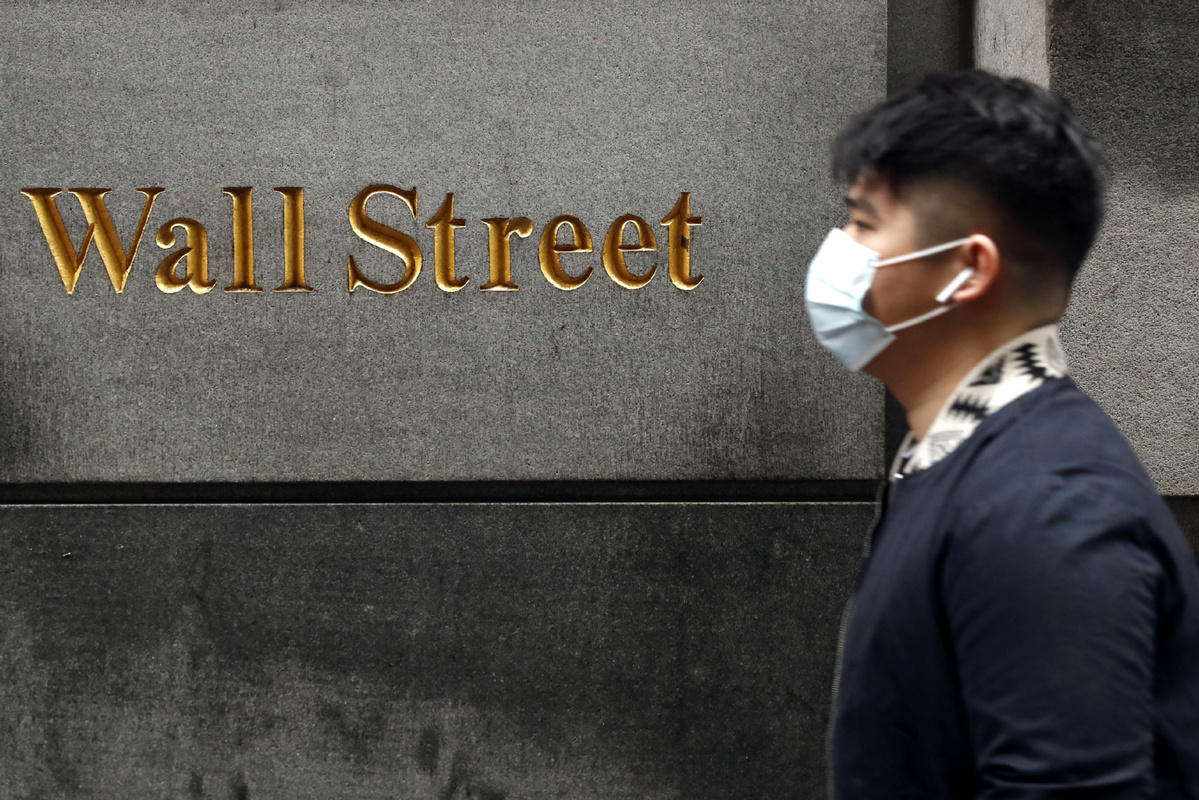 A man wears a protective mask as he walks on Wall Street during the coronavirus outbreak in New York City, New York, US, March 13, 2020. [Photo/Agencies]

For the week ending Friday, the Dow fell 6.5 percent, the S&P 500 5.6 percent and the Nasdaq 5.5 percent. The major averages had their worst one-week performance since March.

The S&P US Listed China 50 index, which is designed to track the performance of the 50 largest Chinese companies listed on US exchanges by total market cap, logged a weekly rise of 0.06 percent.

The moves came as the pandemic rages on and some European countries began to implement new restrictions.

"COVID-19 cases and hospitalizations are surging across the United States and Europe. The stock market appears to be taking note," analysts at Zacks Investment Management, said in a note Saturday.

The daily new cases have regularly surpassed 80,000 recently in the United States. The country has reported more than 9.1 million in total infections with the death toll surpassing 230,000 as of Saturday afternoon, showed a tally by Johns Hopkins University.

"The threat of another economic lockdown is low, but cities with spiraling hospitalization rates may need to pursue more targeted restrictions and closures. The stock market is likely to respond adversely to any planned economic restrictions," Zacks analysts added.

In addition to surging COVID-19 cases, investors were keeping a watchful eye on the upcoming election and what the results could mean for the markets.

"Elections have consequences, but the defeat of the pandemic and subsequent economic recovery will continue to be one of the main market drivers in any election outcome," said analysts at UBS.

On the data front, US economic activity in the third quarter grew at an annual rate of 33.1 percent after a sharp contraction in the previous quarter, the US Commerce Department reported Thursday. The reading exceeded the 32-percent estimate from economists surveyed by Dow Jones.

The rebound came after the economy plunged at a revised annual rate of 31.4 percent in the second quarter amid mounting COVID-19 fallout, which has been the largest decline since the US government began keeping records in 1947.

"The increase in third quarter GDP reflected continued efforts to reopen businesses and resume activities that were postponed or restricted due to COVID-19," according to the advance estimate released by the department's Bureau of Economic Analysis.

The number of initial jobless claims in the United States fell to 751,000 last week, as the labor market continued to recover at a slowing pace, the Labor Department reported on Thursday.

In the week ending Oct 24, the number of Americans filing for unemployment benefits decreased by 40,000 from the previous week's upwardly revised level of 791,000, showed the report.

US Consumer Confidence Index stood at 100.9 in October, down from 101.3 in September, as Americans' assessment of current conditions improved while expectations declined, New York-based The Conference Board reported on Tuesday.

"There is little to suggest that consumers foresee the economy gaining momentum in the final months of 2020, especially with COVID-19 cases on the rise and unemployment still high," said Lynn Franco, senior director of Economic Indicators at The Conference Board.