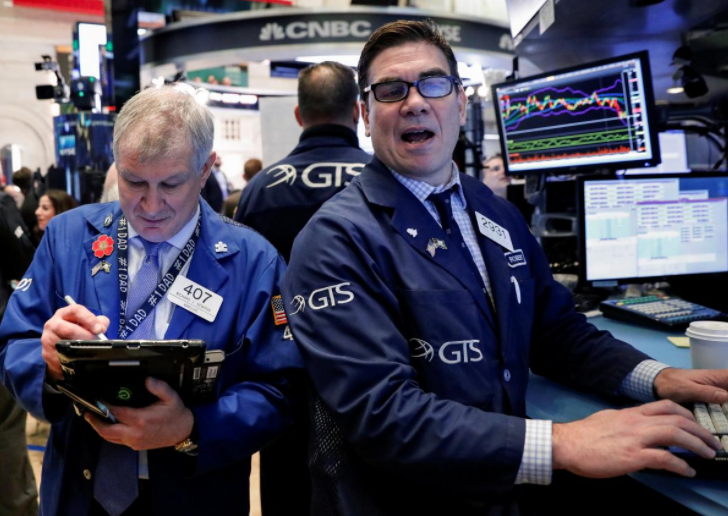 Traders work on the floor of the New York Stock Exchange, (NYSE) in New York, US, February 26, 2018. Photo: Reuters/Brendan McDermid

US stocks rose from their session lows on Wednesday as gains in online travel company Booking Holdings and retailer TJX helped offset losses in healthcare stocks.

Off-price apparel seller TJX jumped about 10 percent after posting upbeat same-store sales. Their shares along with those of big tech companies helped lift the S&P 500.

About 76 percent of the S&P 500 companies that have reported so far have topped profit estimates, according to Thomson Reuters I/B/E/S. That is above the average 72 percent recorded in the past four quarters.

“There is positive economic fundamentals and corporate earnings. While valuations are somewhat elevated, they are not at extremes,” said Bill Northey, senior vice president, US Bank Wealth Management, in Helena, Montana.

Celgene’s 8 percent drop was a drag on the healthcare sector after US health regulators rejected the company’s application seeking approval of a multiple sclerosis drug.

Wall Street opened higher after the government revised lower its reading on economic activity in the fourth quarter to 2.5 percent. A regional gauge on US Midwest factory activity fell more than forecast in February, while pending home sales unexpectedly declined in January.

The latest set of data weakened the case for a faster interest rate hikes, fears of which had led to a selloff earlier in February and set up the S&P and the Dow for their first monthly declines in 11 months.

The US 10-year Treasury yields US10YT=RR, the benchmark for global borrowing costs, was last at 2.8806 percent, while the CBOE Volatility index .VIX, a measure of short-term stock market volatility, was near a session high of 18.46.