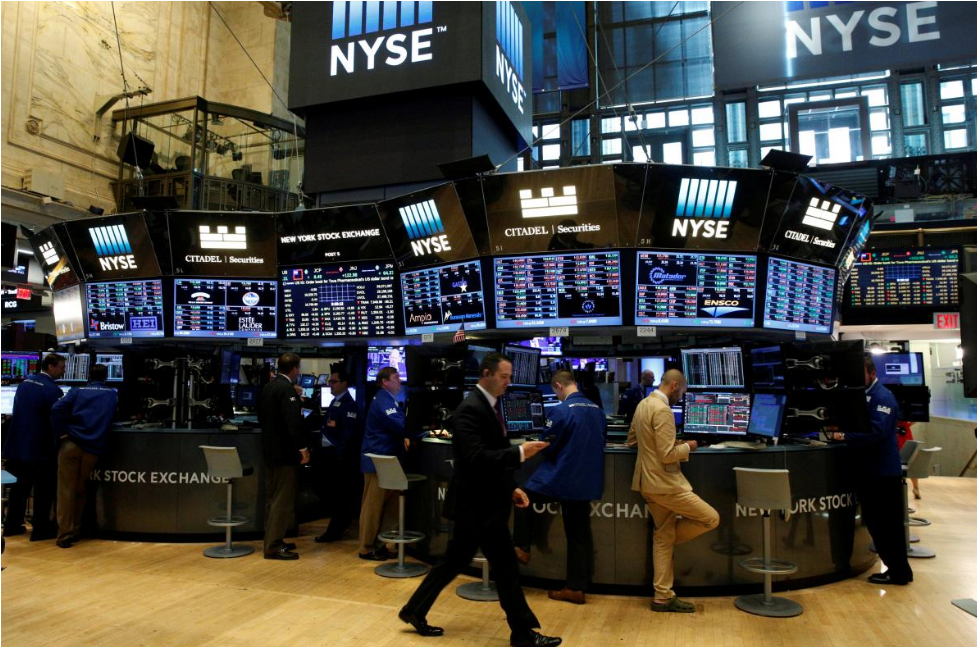 Traders work at the Citadel Securities post on the floor of the New York Stock Exchange (NYSE) in New York City, US, July 18, 2016. (Photo: Reuters)

US stocks fell on Wednesday as President Donald Trump’s latest comments fueled skepticism over US-China trade talks and ahead of a Federal Reserve report that could indicate the pace of future rate hikes.

Trump signaled a new direction for the trade talks, saying the current track appeared “too hard to get done”, a day after telling reporters that he was not pleased with the recent talks.

US Treasury Secretary Steven Mnuchin’s announcement over the weekend that the two countries had put the prospect of a trade war “on hold” had raised expectations that the world’s two largest economies would avert a damaging trade war.

“It’s little bit of carry through from yesterday when Trump spoke about trade and that there was going to be some issues with North Korea (summit),” said Paul Nolte, portfolio manager at Kingsview Asset Management in Chicago.

The United States is prepared to walk away from negotiations with North Korea if the upcoming talks on its nuclear weapons program head in the wrong direction, said US Secretary of State Mike Pompeo, while expressing hope the summit will take place next month.

The latest uncertainty comes as investors prepare to assess the Federal Reserve’s May meeting minutes, scheduled for release at 2:00 p.m. ET, for indications on how many rate hikes are likely this year.

Policymakers are split between those who see another two rate hikes and those who expect three, in the backdrop of low unemployment, moderate growth and rising inflation.

Seven of the 11 major S&P sectors were in the red, with financial sector .SPSY leading the declines, down 1.3 percent.

The big banks fell after being outmaneuvered by smaller rivals in the rewriting of the Dodd-Frank law that rolled back some of the restraints imposed following the 2007-2009 global financial crisis.

Industrials .SPLRCI, which as a group are the most sensitive to trade issues, fell 0.9 percent.

Retailers had a mixed day. Target sank 5.6 percent after the retailer’s quarterly profit rose less than expected as increasing investments dented margins. The results weighed on Walmart , which fell 0.9 percent.

Tiffany surged 19.6 percent after the jeweler’s quarterly results blew past estimates and the company raised its full-year profit forecast and announced a $1 billion buyback program.

Lowe’s  gained 9.3 percent after the home improvement retailer maintained its annual financial targets and billionaire investor Bill Ackman was reported to have bought a $1 billion stake in company.

Comcast  dipped 1.7 percent after the US cable operator said it was preparing to top Disney’s  offer for certain Twenty-First Century Fox assets.

Trump: China trade deal 'too hard to get done'